Senator Barack Obama has clinched the Democratic nomination. DW-WORLD.DE spoke to former US Ambassador to Germany John Kornblum about the prospect of an Obama presidency. 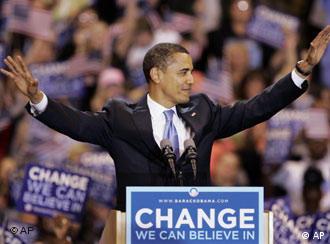 "Obama is a fresh new face, someone who offers a vision and brings people together..."

John Kornblum served as US ambassador to Germany from 1997-2001 during the Clinton administration. He also served as one of Hillary Clinton's advisors during the campaign that ended late Tuesday, June 3, with Senator Barack Obama securing the Democratic nomination. Kornblum, 65, who has been a career diplomat since 1964 with several stints in Germany, is now a senior advisor at the private investment banking firm Lazard Germany and is a long-time resident of Berlin.

DW-WORLD.DE: Barack Obama is now the Democratic nominee, but can he win the general elections in November?

John Kornblum: The question needs to be put the other way around. Given the sad state of the Republican Party, is there a chance that John McCain can win? The Republicans nominated the best candidate possible. McCain is a moderate within his party, a well-known US senator and a war hero. One disadvantage is his age -- 72 when he would assume office -- although the definition of what is too old to become president is changing these days. The Republicans have nominated someone who has a fighting chance, but all things being equal, I'm betting on the Democrats winning.

Is America ready for a black chief executive in the White House?

I don't know, but it's the first time that a black candidate has a real shot at the presidency. The race is wide open. 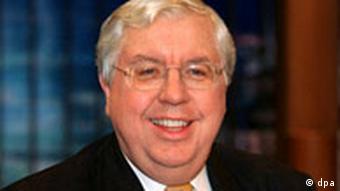 If Europeans could vote for US president, Obama would win by a landslide, according to various polls. Why is Obama so appealing to Germans and other Europeans?

For the same reason he is appealing to Americans. After a difficult period in the world [with the Bush administration leading the US] Obama is a fresh new face, someone who offers a vision, a fresh start and brings people together, instead of dividing them.

But Europeans also like US presidents to be experienced in world affairs, which Obama is not… and he is only 46 years old, a junior senator from Illinois.

Americans say the same thing. That is one criticism that has been leveled at Obama. Experience doesn't matter too much. Few US presidents are very experienced [in foreign affairs]. Being US president is a job that involves no training. You have to learn as you do it.

Obama would be 47 when he assumes office, which is older than John F. Kennedy or Bill Clinton were when they took the oath of office. Age doesn't make a difference. Obama has got lots of political and practical experience going back 25 years.

You wrote a commentary in Britain's Guardian newspaper in which you suggested that Europeans and the rest of the world should let the Americans know who they want for US president. Can world public opinion and the global media really influence the US elections?

It's time for the Democrats to capture the White House, says Kornblum

They have already influenced the elections very strongly, by voicing concern over the way the [Bush administration] has conducted itself in the past eight years. You look at all the polls. America's standing in the world had never ever been so low. These figures have registered everywhere in the United States. I hear this again and again from Americans -- "our standing in the world is so low" -- and that in turn has influenced American public opinion of the Bush administration's policies.

So Americans do care what the world thinks.

America's image in the world has now improved, because the campaign has been so exciting and such unique candidates are running. A name like Barack Obama goes a long way in how Third World countries view the US.

What would a President Obama mean to the rest of the world -- son of a Kenyan father, white American mother and a childhood spent in Indonesia, a predominantly Muslim country? What does this say about America?

It demonstrates how open and democratic American society is. All kinds of people make up the American political establishment. The disadvantage for Obama is that Americans and the world have such high expectations of him. Once in office, he will find out about the constraints of the presidency -- that the political system is complex and hard to move, that he cannot hold up to many campaign promises. This goes for McCain too. As president, a period of reality sets in and some people could be disappointed.

Which candidate -- Obama or McCain -- would be better for Europe and the world in terms of foreign policy, free trade?

Both are excellent, and they are really on the same wavelength on the issues. McCain would be better for trade, since the Democrats have ties to trade unions, so they need to be more skeptical. 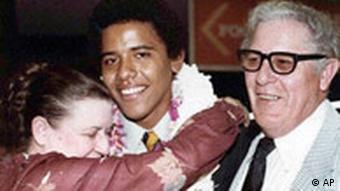 A fresh face: Obama with his maternal grandparents

If you line up the positions of the two candidates, there are only nuances in the differences. Even on Iran [acquiring a nuclear arsenal] and the Iraq War, Obama and McCain are moving closer to each other's positions. Obama has revised what he said about preconditions in negotiating with Iran and McCain has never said he would bomb Iraq. There are no real major differences in substance. There's a difference in emphasis -- McCain is much more critical of Russia, for instance.

You're saying their campaign rhetoric is going to be different from what either does as president in office.

That's usually the case, but even what both candidates are saying on the campaign trail is not so different. Once in office, there is a strong push of realism that hits every president.

How would a new American president change US-German or the transatlantic relationship?

Bilateral relations depend not so much on who is president or chancellor, with the exception of 2003 when things got so bad [after the US-led invasion of Iraq, when Bush and then-Chancellor Gerhard Schroeder had a falling out over vocal German opposition to the war]. 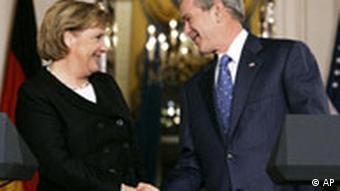 Relations between the US and Germany became more cordial under Merkel

The real issue is not whether one president or chancellor can do better than the previous one, but that Europeans -- the Germans, French, Brits -- come together with the US to develop a common Western strategy. We need to talk about ourselves, not in terms of North America and Europe, but as the "West" becoming an integrated entity.

The Atlantic is not a canal separating us, but a bridge joining us together.

One final question: Who are you voting for in November?

Obama. I tend to vote Democratic, but not always.

You also said McCain would be excellent.

We're in a special period right now in that the Republicans need to go in the opposition to clear the air after such a difficult eight years.

European papers largely ignored the final hours of the Democratic primary. Those papers which did cover the campaigning seemed glad it would soon be over, and offered some (almost) final thoughts on the loser. (03.06.2008)

Voters in five major European countries showed a strong preference for Barack Obama as their favourite candidate to win the United States presidential elections, according to a poll published on Friday. (30.05.2008)

Berlin On the Itinerary for Bush, Possibly for Obama

In June, George W. Bush plans to make what's likely to be his last visit to Berlin as US President. But people in the German capital are more enthusiastic about seeing another prominent US politician. (27.05.2008)