Germany has only a small share of the global wine market, but it is mighty. But up-and-coming wine-makers from surprising places, like China, are giving "Old World" winegrowers a run for their money. 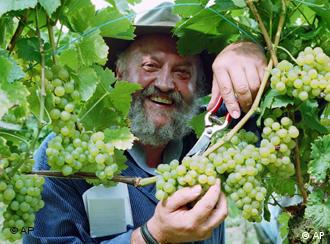 Growing grapes is a labor of love

"Life is too short to drink bad wine," Germany's most famous poet, Johann Wolfgang von Goethe, supposedly once said. Goethe, it should be noted, loved drinking his "grape juice" each evening.

Like Goethe at the turn of the 19th century, more and more Germans are drinking wine these days -- and replacing the image of Germany as a beer-drinking nation. Even in the biggest markets in the world -- the United States and Japan, more people are sipping away at the nectar of the gods. German vintners have therefore been placing their bets on one wine they do very well: Riesling.

"Riesling continues to be our 'hot' wine," said Steffen Schindler, director of foreign marketing at the German Wine Institute (DWI) in Mainz. "We've seen that since the beginning of the 1990s, the selection of wines around the world has grown dramatically, so we've really had to carve a niche for ourselves."

That niche coincides with changes in eating habits.

"People are eating lighter, healthier meals," Schindler said. A light, fruity white wine suits such cuisine -- and that's where the popularity of German Riesling comes in. It fits the bill, according to Schindler. 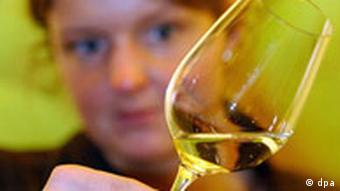 It's all in the Riesling, say German wine exporters

DWI is the national marketing organization for German wines. Wine shops and producers all contribute to DWI's budget -- much like a tax. The DWI decides how German wines are to be marketed on both domestic and foreign markets. The marketing methods are supplemented by winegrowers' own private advertising strategies.

Obviously, part of developing marketing strategies is to know your competitor.

While Europe still remains the world's biggest wine producer -- with Germany producing 3 percent of the world's wine, vino from so-called "New World" countries such as the United States, Argentina, Australia and Chile has become stiff competition for "Old World" -- or European -- winemakers. More and more wine is being cultivated in these countries.

According to the International Organization of Vine and Wine (OIV), wines from such New World countries now have a 25.5 percent slice of the 80 billion-euro ($100 billion) global wine market. That market share was 1.6 percent 20 years ago.

The European Union's five largest wine producers -- Italy, Spain, France, Germany and Portugal -- have seen their portion decline from 75 to just over 62 percent in those two decades, according to AFP news agency. At the same time, wine consumption in the strong wine-producing countries like France, Italy and Spain, has dropped in the past few years -- meaning that EU nations are producing more wine than they can sell.

The European Commission has therefore called for a reform of wine cultivation and trade in EU-member states.

"The plan aims to increase the competitiveness of EU wine producers, strengthen the reputation of EU wines and win back market share…," the Commission said in a June statement. The idea is to reduce quantity and improve quality. 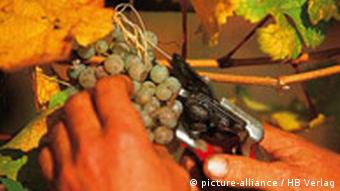 How the grapes are cut from a vine is important

German vintners say they can offer those quality wines. Luckily, a tasty Riesling can only be made in Germany, Schindler said.

"We have a very particular climate here," he said. "Chardonnay vines -- which are probably the most popular sort right now -- can be cultivated virtually anywhere. That's not the case with German Riesling, or Silvaner, which only grow in the unique climate we have in the south and southwest part of the country."

So, while German wine-makers are worried about tough competition from winemakers abroad, even from countries such as China -- which is now the world's seventh-largest producer of wine -- they are relying on the popularity and quality of Riesling -- not just for sales, but also to help them market other German wines abroad. 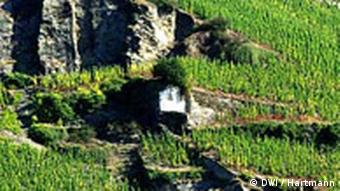 Vineyards along the Moselle river

"The Chinese have been making wine for over 9,000 years," he said in an interview this month with the Frankfurter Allgemeine Zeitung paper, adding that the winegrowing regions of China lie along the same degree of latitude as Bordeaux, Tuscany and the Napa Valley.

Even areas which have normally not been suited for wine cultivation in the past may be so in the future. Global warming is helping along countries such as Britain and even the Netherlands to make their mark in wine-making. New types of vines, too, are able to thrive in moderate, rainy climates, not just in sunny, warm ones.

That means that other areas could potentially develop climates as "unique" as Germany's -- giving rise to more wine cultivators and therefore competitors.

Even nuns have their own Riesling vineyards along the Rhine

For now, however, German wine producers are riding the wave of dramatic exports, which rose about 13 percent in the past 12 months.

"The most dynamic market for us right now is the United States -- there, growth has been around 30 percent in the past year for German wine exports," Schindler said, "and that's mainly because of Riesling."

It is also an affordable wine: a good bottle starts at around $10 in the US; in Germany, the same costs around four and a half euros ($5.60), Schindler said.

Perhaps one of biggest reasons for the growth of German wine exports, however, is a change in image.

"In the 1990s, we used to try to 'educate' people abroad about German wine," Schindler said. "We explained everything from the 13 wine-growing regions here to the different types of grapes and their harvest times.

"At some point, we realized that's all just too complicated for our foreign customers," Schindler said. "Most consumers just want to have fun -- they don't want lectures before they start drinking a glass of wine."

That's probably what good old Goethe thought, too -- even six feet under, his mouth may be watering for his favorite elixir.

EU Winemakers Likely to Be Asked to Dig Up Some Vines

Vintners in Europe are facing major reforms from 2008 that aim to cut production and enable wineries to hold their own against tough competition from competitors in Chile and Argentina. (04.06.2006)

As the trade fair ProWein continues in Düsseldorf, Germany's wine industry has plenty to celebrate: Exports are booming. Still, vintners worry about what the future may bring. (27.03.2006)

German winegrowers are innovating and returning to their roots in order to compete in an increasingly cut-throat industry. (22.10.2005)