Two concerts in Bonn and Berlin mark the end of this year's German-Ukrainian musical campus, a joint project by Deutsche Welle and Beethovenfest. But the initiative offered more than just beautiful music. 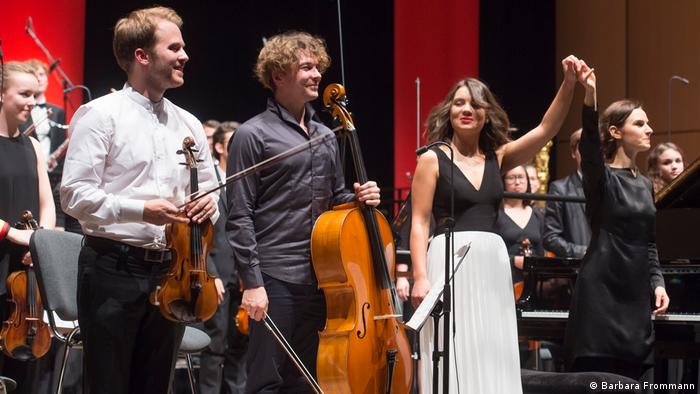 Ovations for the soloists of the evening: Tobias Feldmann, Konstantin Manaev and Kateryna Titova, together with conductor Oksana Lyniv

The young musicians participating in the campus enjoyed a boisterous round of applause after concluding their performance on September 15 during the Beethovenfest.

The musicians spent two week rehearsing, first in Ukraine and then in Germany.

Under the leadership of charismatic conductor Oksana Lyniv, the young musicians gave an elegant rendition of a charming overture by Franz Xaver Wolfgang Mozart, unleashed the tragic force of "Vistula" by Ukrainian composer Boris Lyatoshinsky, and dived into the intensity of Beethoven's "Triple Concerto." 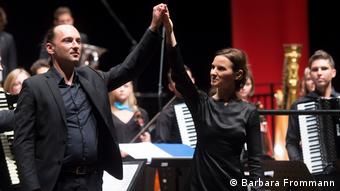 But the project also sent a political message: Ukrainian culture belongs in Europe.

"The 2017 Campus Project has been an exciting journey of exploration of Ukraine, which is, unfortunately, is still 'terra incognita' to many Germans," said Ukrainian ambassador Andrij Melny.

He added that "this year's campus concerts at Beethovenfest provided a unique insight in the musical soul of Ukraine, whose national culture returns to the world stage with confidence and humility, thanks to the generous help of our German friends."

The program included two world premieres, a rare occurrence even for the Beethovenfest, which is open to new music: In "From the Moon and the Maiden," German composer Stefan Hippe reworked Ukrainian folk songs, whose sorrowful magic once inspired Beethoven, for accordions. And Ukrainian composer Bohdan Sehin presented a tribute to music life in Lviv, a vibrant sound fresco fabricated from parts of old popular songs.

The piece was commissioned by Deutsche Welle.

For the encore, there was Modest Mussorgsky's "The Great Gate of Kiev," requested especially by festival director Nike Wagner.