The German town of Bad Nauheim has unveiled a bronze statue of its most famous resident — Elvis Presley. Even years after the Rock 'N' Roll star's death, fans in Germany still can't help falling in love with "The King." 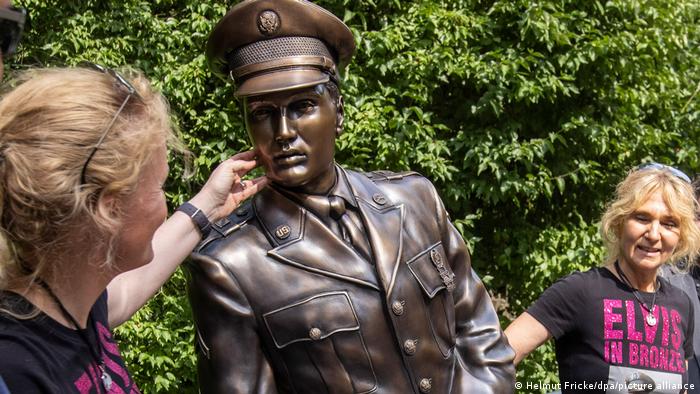 After years of planning and fundraising, two Elvis fans saw their dream realized on Friday

The picturesque German town of Bad Nauheim officially presented a statue of "The King of Rock 'N' Roll," in celebration of his time there.

Presley lived in the town, some 30 kilometers (19 miles) north of Frankfurt, while stationed as a US soldier from October 1958 to March 1960.

The statue pose was based on a photo thought to have been taken in 1959 that shows Elvis, in army uniform, leaning on the rails of a footbridge in the town. The artwork stands on the same bridge, in the same position.

Bad Nauheim already includes many markers and memorials to the late rock star, even a square named after him.

The unveiling comes as the town celebrates its European Elvis Festival, which also includes concerts, guided tours and a classic car parade.

Germany's love for 'The King'

Hardcore fans of the music legend regularly visit Bad Nauheim, where local authorities have preserved many of the sites that date back to his time there.

Two Elvis fans, Angela Storm and Meike Berger, came up with a plan to erect a statue in Presely's honor back in 2018. They went on to raise their own funding for the project.

Germany has a soft spot for the famous singer and particularly for his time spent in the country — not unlike the national passion for the Beatles' period performing in Hamburg before making it big.

Bad Nauheim has also played host to other big American names throughout its history, not least a young future President Franklin D. Roosevelt, who traveled to the town and went to school there for a short time in the 1890s.

The town of Friedberg, where Elvis served while in the US army, changed its street crossing lights to reflect his signature moves. It also has a statue of "The King."

Baz Luhrmann's fast-paced ride through the life of Elvis Presley arrives in cinemas, with Austin Butler as the singing sensation and Tom Hanks playing his manager.

Bad Nauheim to the north of Frankfurt hosted Elvis Presley during his military days. The COVID-delayed grand reveal is set to take place during the European Elvis Festival this year.