German teenagers are drinking less alcohol, but more irresponsibly | Germany | News and in-depth reporting from Berlin and beyond | DW | 04.02.2011

Over the past 30 years, alcohol consumption among German teens has dropped by half, according to a federal study. Though officials view the results as largely positive, concern remains about youth binge drinking. 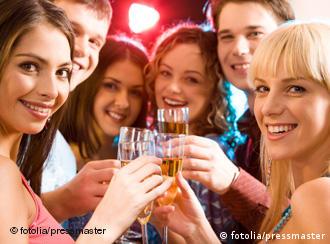 Teens still seek intoxication but are drinking less on the whole

The results of a study presented in Berlin on Friday shows that German youths are drinking less alcohol compared with previous years.

The Federal Center for Health Education (BZgA) said around 13 percent of adolescents between the ages of 12 and 17 consumed some form of alcohol at least once per week, compared to 21 percent in 2004 and 25 percent in 1979.

Young adults between the age of 18 and 25 also showed reductions in alcohol consumption, with 35 percent drinking once per week compared to 67 percent in 1973.

Of the 7,000 teens and young adults surveyed, however, around eight percent of males said they reached intoxication - defined as consuming five or more drinks during one occasion - at least once per month.

Those numbers remained stagnant compared with 2009, giving rise to concern among health officials.

BZgA director Elisabeth Pott said young adults in German were ill-informed of the consequences of binge drinking. She told reporters on Friday that teenagers connected alcohol merely with "partying and having fun" and were less aware of the "serious health effects."

"Binge drinking is still a problem among German youths," Pott said, adding that "controls must really be strengthened to prevent this."

Asked as to their motivation for drinking, over half of the 12 to 17 group said alcohol made it "easier to approach others." Just under 20 percent of those asked said they could "forget their problems" after drinking alcohol.

The study also showed that peer pressure was a decisive factor in the drinking habits of young people: the more often one's circle friends consumed alcohol the higher one's one alcohol consumption proved to be.

Tough economic times and a desire for freedom have driven young Spaniards out of the bars and onto the streets. Rambunctious revelers are subjecting local residents to noise levels of up to three times the legal limit. (05.12.2010)

Legalizing cannabis in Germany is only a political side issue, but the topic persistently finds its way back into the conversation and the headlines. As California votes on the issue, DW looks at the German situation. (25.10.2010)