German taxpayers association hits out at e-car waste | Germany | News and in-depth reporting from Berlin and beyond | DW | 21.03.2016

Why did Porsche get six million euros to develop a luxury e-car? Why does Berlin need to spend 10 million to move a fountain? The German taxpayers' association is back to moan about more budget absurdities. 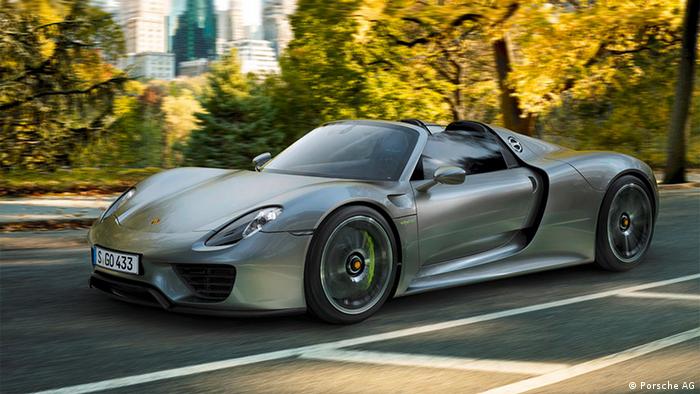 Germany's association of taxpayers (BdSt) thinks the season is right. The self-appointed watchdog of the government's spending budget released its "Spring Cleaning Campaign 2016" on Monday to warn Finance Minister Wolfgang Schäuble to make sure he sticks to what Germans call "the black zero" - the balanced budget - when he presents his new budget plan later this week.

As usual, the BdSt identified a range of bizarre-sounding government projects across several departments to complain about: from movie business financing (10 million euros, or $11.2 million), the re-location of the Neptune fountain in Berlin (10 million euros), the development of cheaper fish food in India, China, and Egypt (295,000 euros), and the "long-term stabilization of beer in regard to taste and clarity" (253,000 euros). 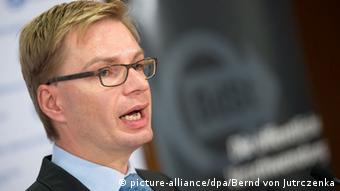 Reiner Holznagel want Germany to stick to the "black zero"

But the association also had a lot to say about the budget surplus of 12 billion euros that the finance ministry announced proudly in January (double the six billion that had been expected). BdSt spokesman Reiner Holznagel told a handful of reporters that he would have liked to have seen "at least some of the surplus" to be invested in reducing Germany's national debt. Instead, the government is aiming to invest this in new projects to integrate refugees - from social housing to language courses.

But, as one correspondent pointed out, seeing as Germany's national debt now stands at over two trillion euros, and the fact that local governments will need more money to cope with the refugee influx, it doesn't look like the federal government has much choice - better that than borrowing more money to pay for integration.

In response, Holznagel admitted that plowing the money back into Germany's immense debt would be no more than a "symbolic" gesture - but he felt it would have been an important signal. "The refugee situation as such can neither be financed through new taxes or through new debt - it's a priority," he said. "We criticize the fact that the entire 12 billion is being made available for it."

He also argued that Germany's state governments were already counting on the extra money from the federal government, and were therefore inflating their needs to improve their bargaining positions. "Some of the states are passing on the funds to the local councils, where they're needed, while others are keeping the money - we need a unified procedure, we need a coordination of integration costs, so that different projects aren't created that might not have the effect we want," he said.

But a large part of the BdSt's spring-cleaning action was taken up with criticizing various government environmental initiatives. There was derision for the 457,000 euros being shunted into a new Internet platform and an app called "My eDrive" aimed at making it easier for potential buyers to find the electric cars suitable for them, and equal scorn for the 16.4 million euros being pumped into motivating major car companies to invest in a network of electric charging stations around the country. 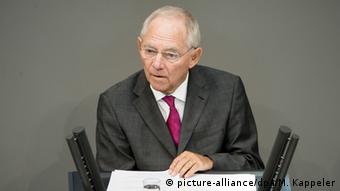 Schäuble is about to present his new budget

"Once again the taxpayer has to play the venture capitalist because the financially powerful companies are scared of carrying the risk on their own," the BdSt's "spring cleaning" pamphlet said. "But once the grid is established, it's the private operators - on their own - who will profit."

Holznagel was eager to point out that the BdSt has nothing against protecting the environment - the point is: how effectively is the money being spent? "We're giving up a lot of money for ecological and environmentally-aware projects at the moment," he told DW after Monday's press conference. "The energy transition is a well-formulated aim of the government, but we have noticed that they are not following a coherent plan. That's why we're criticizing these individual measures."

"Of course we have to do something, of course the environment has to be a priority," he admitted. "But we have to ask: what we're doing, does it have an effect? An unbelievable amount of money is being invested in e-mobility, without there being any noticeable progress."

Interestingly, Friends of the Earth Germany (BUND) is right behind the BdSt on this issue, specifically the six million euros that was handed to car-maker Porsche (operating profit for 2014: 2.7 billion euros) by the Education and Research Ministry to develop a luxury e-car.

"It's often that the wrong projects get subsidized," said Jens Hilgenberg, who specializes in the issue at BUND. "If you want to make electric cars market-ready in any form, then you can't go and subsidize a project at Porsche - you have to go to the universities. You have to develop a better technology that is usable by all the manufacturers - and not give individual manufacturers who are making massive profits extra money to do their homework - we don't understand that."

Germany's central bank has reported that the wealthy are prospering most from low interest rates and easy access to cash. The bottom half of households have meanwhile gotten by with less of Germany's total wealth. (21.03.2016)

Berlin's mayor has been forced to answer questions in parliament over the decision to grant a lucrative contract to the consultancy McKinsey. The US firm has hired one of the mayor's old party colleagues. (18.03.2016)