As Germany reports another dismaying record in COVID statistics, its hardest-hit states are planning stricter curbs. Among other things, the country's beloved Christmas markets are being canceled one by one. 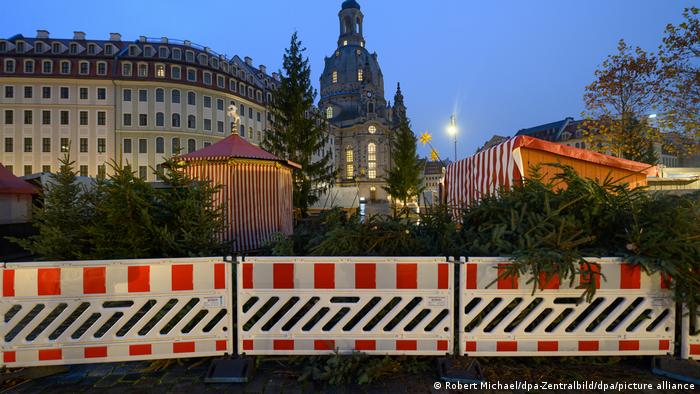 Germany on Tuesday reported a record seven-day incidence of coronavirus infections as the country battles a fourth wave of the pandemic, with its hardest-hit states set to impose stricter curbs in a bid to stem the spread of the disease.

The public health agency Robert Koch Institute (RKI) announced a rate of 399.8 infections per 100,000 people over a seven-day period, up from the 386.5 seen on Monday. The number of new infections within 24 hours was given as 45,326, an increase of 13,278 positive tests over the same day a week ago.

The death toll from the disease rose by 309.

German hospitals are starting to report difficulties, with intensive-care units filling rapidly across the country.

The caseload also far exceeds the national average in several German states, notably those in the east and the south of the country. Saxony registered 969.4 cases per 100,000 people on Tuesday, followed by Thuringia on 685.3 and Bavaria on 644.9. All three states have below-average rates of vaccination.

So far, Germany has rejected calls to introduce compulsory vaccination, although leading legal experts have argued that such a move would be compatible with the constitution.

Several state premiers, including those of Baden-Württemberg and Bavaria, have come out in favor of making vaccination obligatory.

However, acting Health Minister Jens Spahn has reiterated his opposition to such a move, telling broadcaster Deutschlandfunk that compulsory vaccinations would not "solve our acute problem" with the fourth wave. In an interview on Tuesday, he said it would also be difficult to implement the measure, with fines affecting the poor more than the rich, for example.

Currently, 68% of the population has been fully vaccinated, one of the lowest rates in Western Europe.

The recent surge in infections is prompting governments in several of Germany's 16 states to consider restrictions that are likely to particularly affect those people who have chosen not to be vaccinated against COVID-19.

The state of Brandenburg, which surrounds Berlin, is to make certain retail sectors accessible only to people who can either prove they have had and recovered from COVID-19 or are vaccinated. This so-called 2G rule will also apply to all services requiring close physical contact, sports facilities, indoor playgrounds, museums, leisure parks, zoos and botanical gardens.

The city-state of Berlin also said on Tuesday it would extend the 2G rule to retail, hotels, adult education facilities, driving schools and sports. Businesses selling essential goods, such as supermarkets and drugstores, will be exempted.

Thuringia is reportedly considering imposing a curfew till mid-December on unvaccinated people from 10 p.m. to 5 a.m. The state parliament is to vote on this and other measures on Wednesday.

In a sign that restrictions are likely to grow as winter progresses, more and more of the country's world-famous Christmas markets have been canceled, with Stuttgart, Bavaria, Brandenburg and Saxony all banning the events.

The markets were originally planned to have taken place with strict preventive measures in place.

While some fairs are opening as planned, others are being cancelled to counter rising coronavirus infections. Here's everything you need to know.