California hopes to use 33 percent renewable energy by 2020, making it an attractive market for Geman solar companies. Chancellor Angela Merkel is emphasizing German-Californian cooperation during her visit to the state. 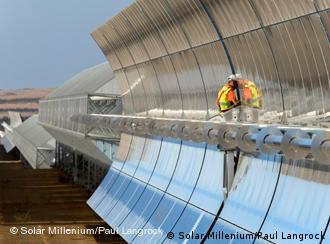 German companies have been using their solar experience in California

German companies eager to profit from their expertise have been flocking to California in recent years. With government incentives driving the growth of renewable energy sources at a breakneck speed in the US, California has emerged as one of the nation's most active markets for solar energy.

The companies range from contractors who install solar panels on homes to energy suppliers, who feed electricity from renewable sources into the nation's power grid. Some enterprises form partnerships with local companies while others launch North American subsidiaries. But all say there is no shortage of demand.

Growth potential yet to peak

California's economy is the eighth largest worldwide, and its goal is to use 33 percent renewable energy by 2020. Angela Merkel said during her current visit that the state is a source for German cooperation in both industry and scientific research.

"We can dramatically develop our relationships here," she told the dpa press agency.

German companies have been doing just that, largely because California's solar energy market is known for rapid growth thanks to progressive government policies.

Johannes Buchholz, managing director of the German-American Chamber of Commerce in San Francisco, said those companies developed much of their expertise because of Germany's feed-in tariff, which pays for renewable energy supplied to the electricity grid. 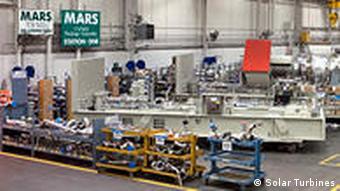 Necessity and subsidies have driven innovation

The California Solar Initiative, a $2.1 billion program (1.5 billion euros), currently covers about 13 percent of the cost of installing photovoltaic systems at businesses, homes and government or nonprofit organizations that are connected to the electricity grid in the state.

Jana Kopyciok of the California Center for Sustainable Energy in San Diego, said the initiative is a 10-step program intended to be spread over 10 years. As subsidy funding is spent and demand increases, the amounts allotted per megawatt generated decrease. But some sectors of the program are already in their seventh stage, after just three years.

"It's going much faster than anticipated. People were far more interested in solar energy than was anticipated in the first place," Kopyciok told Deutsche Welle.

The boom in solar energy in California may lose some of its momentum once state subsidies expire, but Kopyciok said federal programs and rising utility prices are other significant growth factors.

"We're noticing lately that public entities are going solar - are initiating projects - and we believe that's mainly due to federal money. And utility rates are also a big, big factor, because if the utility rates keep increasing, solar becomes more interesting and more viable," she said.

Georg Eversheim is the managing director of Gecko Logic USA, the California affiliate of a German company under the same name in the sthate of Hesse. 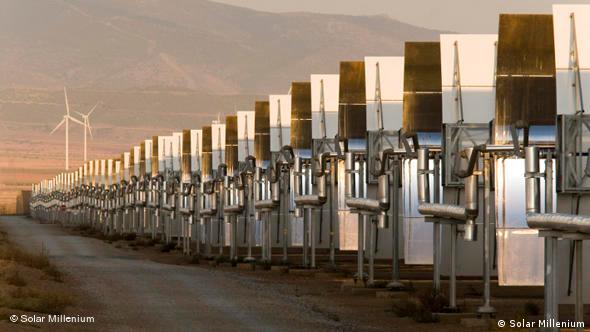 Is solar energy the latest version of a California 'gold rush'?

Expertise gained in Germany transfers to the market in California, according to Eversheim. One particular edge his company enjoys is their experience with the integration of renewable energy sources into the design and architecture of buildings, as is often done in Germany.

"This will have a major impact on the US market, and will encourage a lot of US companies to do the same thing. I think this is a great platform for German companies as well as US ones to work together and to become very strong competitors," he said.

With the demand for solar energy comes a matching demand for solar panels themselves. Bavarian manufacturer SCHOTT Solar is represented on the ground in the United States with the 200,000 square-foot manufacturing facility it opened in Albuquerque, New Mexico, last year. 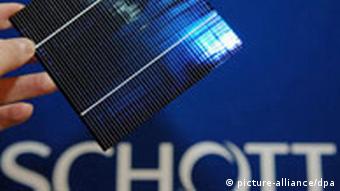 SCHOTT relies on skilled local workers at its facilitiy in Albuquerque, N.M.

Rolf Nitsche, the project director in charge of opening the facility, said it was put on a fast track and constructed in nine months with the support of local government and authorities.

While the company faces competition from Asian manufacturers, it also buys some of its raw materials from that region. It used some of its German equipment vendors initially, but hired nearly all of its employees for the facility locally.

"We built this plant to be here in the US so we'll be ready as the market grows, and we have a lot of space for the future," he said. "But we will also have to think about when to expand. Renewable energy in the US is not a niche anymore."

Germany's renewable energy companies are establishing themselves and earning profits in the growing US energy market. But American companies shouldn't be ruled out of the competition quite yet, some analysts say. (23.07.2009)

How does a solar power plant work?

As a new solar cycle of activity begins this year, the Earth will once again be bombarded with increased radiation from the sun. This effect may damage satellites and interfere with GPS, television and communications. (10.03.2010)