How does a solar power plant work? 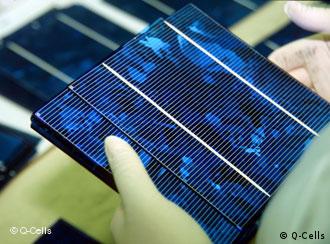 Solar cells such as these are used in photovoltaic solar technology

There are two types of solar power plants. They are differentiated depending on how the energy from the sun is converted into electricity - either via photovoltaic or "solar cells," or via solar thermal power plants.

Particles of solar energy, known as photons, strike the surface of a photovoltaic cell between two semiconductors.

These semiconductors exhibit a property known as the photoelectric effect, which causes them to absorb the photons and release electrons. The electrons are captured in the form of an electric current - in other words, electricity.

A solar thermal plant generates heat and electricity by concentrating the sun's energy. That in turn builds steam that helps to feed a turbine and generator to produce electricity.

There are three types of solar thermal power plants:

This is the most common type of solar thermal plant. A "solar field" usually contains many parallel rows of solar parabolic trough collectors. They use parabola-shaped reflectors to focus the sun at 30 to 100 times its normal intensity.

The method is used to heat a special type of fluid, which is then collected at a central location to generate high-pressure, superheated steam.

This system uses hundreds to thousands of flat sun-tracking mirrors called heliostats to reflect and concentrate the sun's energy onto a central receiver tower. The energy can be concentrated as much as 1,500 times that of the energy coming in from the sun.

A test solar power tower exists in Juelich in the western German state of North-Rhine Westphalia. It is spread over 18,000 square meters (194,000 square feet) and uses more than 2,000 sun-tracking mirrors to reflect and concentrate the sun's energy onto a 60-meter-high (200 foot high) central receiver tower.

The concentrated solar energy is used to heat the air in the tower to up to 700 degrees Celsius (1,300 degrees Fahrenheit). The heat is captured in a boiler and is used to produce electricity with the help of a steam turbine.

Solar thermal energy collectors work well even in adverse weather conditions. They're used in the Mojave Desert in California and have withstood hailstorms and sandstorms.

This is a pool of saltwater which collects and stores solar thermal energy. It uses so-called salinity-gradient technology.

Basically, the bottom layer of the pond is extremely hot - up to 85 degrees Celsius - and acts as a transparent insulator, permitting sunlight to be trapped from which heat may be withdrawn or stored for later use.

This technology has been used in Israel since 1984 to produce electricity.

Villages in the country's South are switching to solar to light up homes and charges cell phones. (19.02.2010)