Germany's renewable energy companies are establishing themselves and earning profits in the growing US energy market. But American companies shouldn't be ruled out of the competition quite yet, some analysts say. 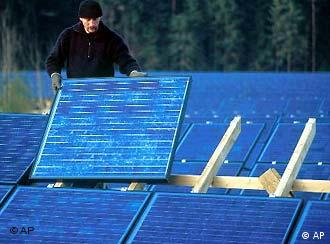 In the United States, Phoenix, Arizona is seen by many renewable energy enthusiasts as an idyllic solar capital. It's the fifth-largest city in the US and boasts more than 300 days of sunshine a year. The only thing missing from this solar center is solar technology.

Some German renewable energy companies are hoping to change that. They've set up shop in the southwestern US state that was the first to enact a law requiring that 15 percent of its electricity comes from renewable sources by 2025.

Utilities once balked at the idea of supplying energy other than that from coal-fired power plants, but now the US system simply needs to change, said Arizona Corporation Commissioner Kris Mayes, who is responsible for regulating the state's utility and energy policy.

Price fluctuations in the oil and gas markets have pushed governments to look for more sustainable energy technologies, she said, pointing to renewable energy sources German companies have been developing and exporting for decades.

Optimistically awaiting the US solar boom 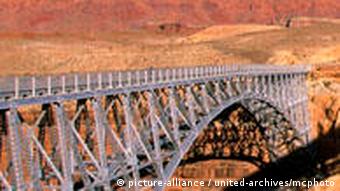 One such company looking to expand in the potentially huge US market for renewable energy is Schletter. The small German company manufactures mounting systems for solar panels.

"I think [Arizona and the United States] want another energy industry, but I'm not sure how far ahead the government in Arizona is," Schletter CEO Martin Hausner said. "At the moment, that's a difficult question for me."

A small showroom with solar system samples sits across from recently purchased office equipment in a small warehouse in an industrial neighborhood where fabrication machines bend and shape the company's products.

"Arizona and the states around Arizona have a great opportunity to develop big solar sites," he said "Now we need, from the government side, the basis to make it happen - to start this market ... and hopefully in the next couple of years the US is the biggest market in the world."

Hausner said he expects to wait at least three to five years before the US renewable energy market truly comes into its own. The US government is only now looking into broad-stroke renewable energy incentives like those long in place in European countries such as Germany and Spain. 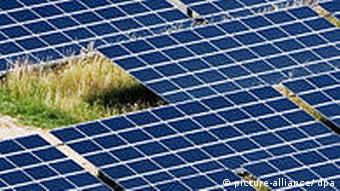 But even when the market matures, it's hard to estimate just how big it will be. Some estimates have put the value of the current renewable energy market at $50 billion (31 billion euros) - an amount that could quadruple by 2015.

"The most developments and biggest companies came from Germany," Solon spokeswoman Katrin Evers said. "But in the approaching years other countries will be very important as well, and Germany must not relax on this position. We must continually work on improvement."

Solon became a main supplier of solar technology to the German government shortly after the company was formed, giving it a boost in a then undeveloped market. Now it's riding a wave of positive public sentiment for renewable technologies in the United States, which Evers said is helping the company stay profitable despite the current global recession.

"We still have our contracts to fill and modules to deliver," she said. "So far we haven't felt anything. But it would be naive to think we won't feel it next year." 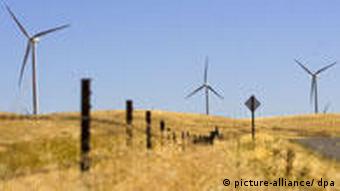 The US wind energy market is also growing

That sentiment is echoed by another German energy heavyweight, REPower, a supplier of wind turbines for utility providers and companies around the world. At a manufacturing site outside the small German town of Husum, near the North Sea, the company's Chief Financial Officer Pieter Wasmuth said REPower is busy on both sides of the Atlantic.

"We're erecting 75 two-megawatt turbines in California," he said, adding that the company had also completed a project in the state of Washington and was engaged in European off-shore wind projects.

Wasmuth said he and other European companies were anticipating a huge boost in US sales in the coming years, but some analysts aren't convinced US companies are down for the count.

One such analyst is Fred Morse. A part-time adviser for Abengoa, a large Spanish solar company, he was also a solar energy adviser for the US government under the administrations of presidents Nixon through Reagan.

"When I joined the Department of Energy in the 70s, the Europeans looked to the US for ideas, and we learned a great deal from our cooperation," Morse said. "While other countries currently may have more favorable policies - like Germany or Spain - I still think the technological capabilities of the US are solid."

US firms not down for count yet

The US firms analysts consider most capable of giving the Europeans a run for their money include General Electric's energy division and First Solar, an Arizona solar panel manufacturer that has made much of its money doing business in Germany.

Morse and other observers have said the US renewable energy market will need large government incentives if the market is to flourish.

"If the technology is allowed to enter the market to get some help to compete against the conventional subsidized fuels, it will not take long before this becomes the technology of choice for utilities," Morse said.

That's just what many renewable energy companies, both in the United States and Europe, are hoping.

Nuclear lobby buoyant as Europe warms up to atomic energy

The revival of atomic energy in Europe and a new nuclear-friendly mood in both the EU Commission and the EU Parliament has given the industry's powerful lobby in Brussels a shot in the arm. (19.05.2009)