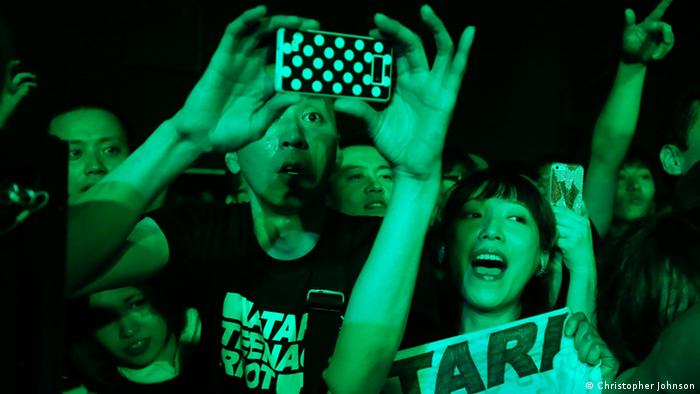 Berlin-born Alec Empire, Japanese-German Nic Endo, and Londoner Rowdy SS are among the world's most outspoken artists. Their memorable Fuji Rock performance in 2011 confronted the Fukushima meltdown head-on, and they continue to decry the ongoing cover-up of information.

Though one of Germany's leading cultural exports, their 1997 album "The Future of War" was banned by the German government in 2003, Myspace in 2008, and Spotify last November.

Alec Empire spoke with DW.de in Tokyo about censorship, internet hactivism and his fears about rising extremism among German youth.

DW: How has internet addiction and the surveillance state influenced your new album "RESET"?

Alec Empire: The record is like an anthem dedicated to internet activism. I grew up in the 80s when the (Berlin) Wall was around. So surveillance technology and the surveillance state is very important to me. Governments have so much direct access to people's privacy, it's very dangerous. It could lead to the downfall of the whole society, the democratic system. These topics are influencing when we write the songs. We don't just do music for fun.

Edward Snowden had an impact on this record. It's not a dystopian view. It's not a cyber-punk negative vision of the future. It is proven. When we warn about the government and technology invading privacy, it's real. It doesn't mean we're these paranoid musicians and artists. 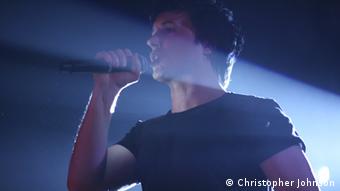 Empire: 'Edward Snowden had an impact on this record'

How have your friends in the hacker community reacted to the surveillance state?

A lot of people are very depressed when you find out it's not actually some idiots online; it's people who are getting paid by the government to do this. It's very important that media are giving the alternative view in society. If you speak to young people, they don't even understand why it's so important, because they take it for granted. They can't imagine a world where there's not a free press anymore. But I can, because of where I grew up in Berlin.

In the 1980s I knew musicians from the east part of Berlin. They would say, "You had to hand in your songs. They would check them, then they would give you permission." That is a real possibility now.

The police try to drag activists onto their battlefield, where people fight each other. This is always where you start losing. If people organize a protest, and they know the government authorities are checking their emails, they feel like "we can't move." So we want to make a record that gives people energy not to give up, gives them power to take the control back.

You helped build the techno movement in the 1990s. How is the music scene changing?

I'm not part of the normal music scene anymore. It's very boring. I thought the techno music in the 1990s was exciting. We were deconstructing the song structure. The music scene now, or what's left of it, is people repeating old formulas and having new faces perform.

All the smarter people moved into hacking. At the hacker conference (in Hamburg), I was thinking: "Here I see the type of people, the younger version, of techno people I knew in the 90s. They think about the future. When is the last time you heard a musician thinking about what will happen in 20 years time?

In the Ukraine, Turkey or Thailand, bands of provocateurs can instigate trouble and scare people into demanding a wider crackdown. Social media can amplify lies very quickly. How can activists counter this?

Indonesia's punk scene is alive and kicking despite conservative forces in the mainly Muslim country which would do anything to repress tatooed activists. (02.04.2013)

It seems stupid to use the term "cultural revolution." But musicians and artists have to get involved with this. As musicians, we can bring people together, and raise certain topics. Fighting in this way, the army can't really fight back.

It's important to inform people on social media to be more careful, do more research, not to get fired up so easily. They don't realize it. There's so much information influencing you, people don't take the time to ask, "What actually happened?" "Why do I feel that way?"

With (Russian punk band) Pussy Riot, it's like, "Are these girls being totally used?" You can't be that naive about it. You just felt immediately that there was a market being created for this stuff.

Growing up in Berlin in the 1970 and 80s, you said you felt isolated, almost outside of Germany. How do you feel now about Germany?

Many Germans might hate me again for this. In the 1980s, I felt protected by the occupying forces (Americans, French, British) against the Germans. Now I feel threatened by the German right and the directions they're going towards.

There is a danger underneath. Some Germans say, "You're crazy." But there's something about the German people that is threatening to minorities. It's more hidden.

Yet the internet was supposed to make the world more connected and open to other cultures.

The weird thing is we're seeing an opposite development. When the Wall came down in '89, the beginning was "these people are free from socialism, and very happy." Then after, it was the idea that "Germany has to get its national identity back. Germany needs to be proud."

I grew up in Berlin where I listened to American radio and the BBC. We were more connected internationally. That really influenced me. I don't believe in things like nation states. It breeds nationalism, with that comes racism. A lot of problems in society are rooted in the idea of having a nation state.

Germany has chosen: "We want to become most powerful nation in Europe. We have to be proud of our history." I'm thinking: "We saw where this led to." It's a warning. Look what Germany has done twice in the past century.

German history can tell us a lot about the future, if we don't change. East Germany was a master of surveillance technology. Now, the shittiest mobile phone is a thousand times more powerful than our (1980s) Atari computer. It's like the technology that the Stazi [East German intelligence] used compared to what we have now.

If the Nazis had the technology of today, imagine that.