Prosecutors will decide whether to try to send a German TV presenter to prison for a satirical poem about Turkey's president. In Germany, an exception to speech protections criminalizes insults against foreign leaders. 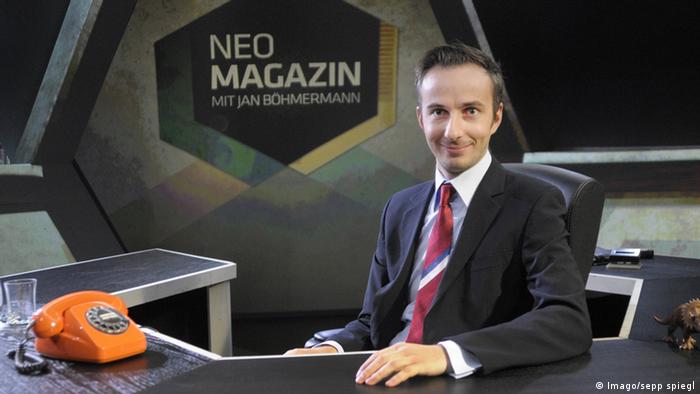 Jan Böhmermann could face three years in prison for insulting Turkish President Recep Tayyip Erdogan on the weekly satirical variety show "Neo Magazin Royale." Before reciting his satirical poem on March 31, Böhmermann called it an example of speech that Germany would not permit. He was perhaps more right than he expected.

"It could be a violation of section 103 of the criminal code: insulting organs or representatives of foreign states," prosecution spokesman Gerd Deutschler said on Wednesday.

Prosecutors in the western city of Mainz, where ZDF is based, plan to consult the federal Justice Ministry on whether to launch criminal proceedings in the name of the Turkish state or President Erdogan himself.

Investigators said they would order ZDF to provide them with a recording of the poem. Late Wednesday, officials at ZDF said authorities had not yet contacted them about the investigation, and gave no further comment.

About 20 viewers launched complaints after viewing the clip. Angela Merkel criticized the poem as "deliberately offensive" and discussed the matter with Turkish Prime Minister Ahmet Davutoglu on Sunday.

Böhmermann aired the poem after Turkish officials called in Germany's ambassador to protest a satirical song aired elsewhere that had lampooned Erdogan in much tamer language. That two-minute clip, "Erdowie, Erdowo, Erdogan," took aim at the president for his alleged spending excesses and his government's crackdown on civil liberties.

Germany's failure to stand up for free speech in that incident led to allegations that Merkel's government had kowtowed to Erdogan because the European Union needs Turkey to keep refugees from setting sail for the EU across the Aegean Sea.

After officials removed Böhmermann's clip from the air and internet, the comedian said he and his employer had "demonstrated the limits of satire in Germany - finally!" Although the clip can still be found through Google, ZDF has combed YouTube to remove links.