German comedian Jan Böhmermann hit the internet with his latest stroke of genius. With heavy metal sounds and an aggressive-looking video, he will turn you into a muesli-loving European liberal - come what may. 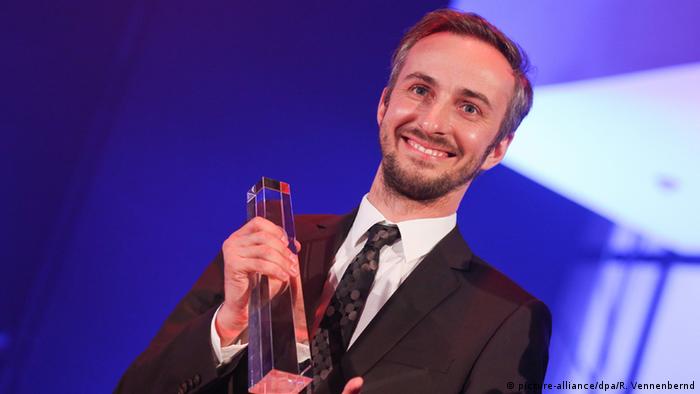 The viral video "Be Deutsch," produced by German national broadcaster ZDF, features German TV host Jan Böhmermann as a zombie-like rock star, bawling about traditional German values that make the country superior - but it's not what you may think it is.

The clip addresses certain world leaders - and those aspiring to lead in the not-so distant future -, reminding them that policies built on exclusion, isolation and demagoguery usually result in widespread tragedy. If anyone knows, it's the Germans.

"Be nice! Or we'll come for you in socks and sandals, reserving your sun lounger with our towels, vegan sausage in our bowels," his voice bellows in the satirical video, toying with popular stereotypes of Germans while turning every single prejudice on its head.

There's no question about who in particular Böhmermann had in mind when he released the clip:

The hashtag for the video is #MakeGermanyGreatAgain, in reference to Donald Trump's "Make America Great Again" presidential campaign in the US.

Trump's anti-immigration views have attracted a great deal of criticism among liberal leaders in Europe in recent weeks.

'Say it clear, say it loud: We are proud of not being proud'

The video starts with a menacing appeal: "Remember, remember the 9th of November, broken glass, fire and plot" - hinting at the horrors of the Kristallnacht pogrom against Jews in Nazi Germany on November 9, 1938, which went on to set the stage for the chilling events of the Holocaust.

The verse is a loose imitation of the popular rhyme that is cited on Guy Fawkes' night across the UK every year on November 5, and which, in recent times, has witnessed a renaissance as a liberation call with the release of the Hollywood blockbuster "V for Vendetta" and the evolution of various protest movements relying on wearing Guy Fawkes masks, including "Anonymous" and "Occupy Wall Street."

In stark contrast to the dystopian society depicted in "V for Vendetta," Böhmermann's video shows Germany as a rather utopian society with opportunity and freedom for all.

It highlights German quirks as well: "We cycle and recycle" and "Birkenstocks stomp the ground" - always making sure that the world knows that Germans remember their dark past, the very reason why multiculturalism, egalitarianism and liberalism can flourish in the country today.

'We are here to remind you we that we have once been stupid, too'

Böhmermann's video also features a short clip of Frauke Petry, leader of the AfD party that has been gaining ground in recent regional elections on an anti-immigration, anti-EU platform.

With "Authoritarian nationalist dorks so tough with your torches and pitchforks, you are not the people, you are the past. The true Germans come for you! Better run fast!" the clip manages to juxtapose Germany's past with its current reputation, largely built on Chancellor Angela Merkel's decision to show a more compassionate policy toward refugees than some of her EU counterparts.

Whether or not you like Böhmermann's music, the parody will make you laugh. Odds are, you might even agree with how Germany does things for we have, indeed, "once been stupid, too."

Germany and the EU have asked Ankara to desist from curtailing free speech after it protested a political satire video released in Germany. The video was critical of Turkish President Erdogan's governing style. (30.03.2016)

German comedian Jan Böhmermann claimed he faked a middle finger gesture by Greece's former finance minister. He actually didn't, but showed how easy media can be manipulated. His dupe has won a top TV award. (09.03.2016)