German federal prosecutors say they have formally applied for the extradition of ex-Catalan leader Carles Puigdemont. He is wanted in Spain on charges related to Catalonia's failed independence bid. 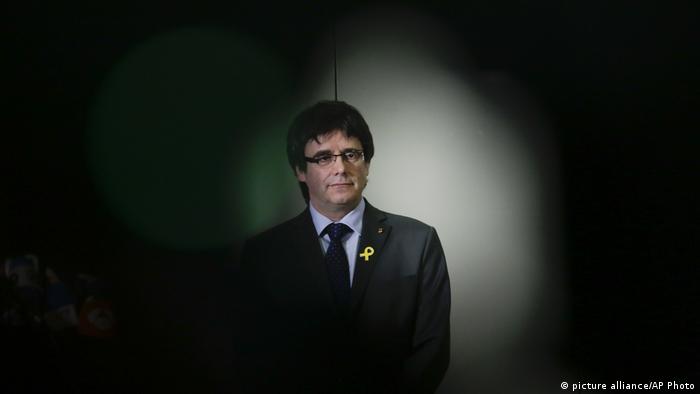 Federal prosecutors in Germany said on Friday they had applied to a higher regional court to have deposed Catalan leader Carles Puigdemont extradited to Spain, where he faces charges of rebellion and corruption in connection with Catalonia's failed bid for independence last October.

Puigdemont went into self-imposed exile in Belgium after Madrid fired him and his government for unilaterally declaring independence for Catalonia. In March he was then detained in Germany on a European arrest warrant while traveling through the country.

Since then, German authorities have been debating whether the charges against him would be punishable in Germany, thus making his extradition possible under German law.

The decision on whether to extradite him will now be taken by the higher regional court in the state of Schleswig-Holstein, where he was detained and spent some time in custody.

The prosecutors said that the question of extradition, which depended only on whether the alleged criminal offenses were also classed as such in Germany, was separate from that of Puigdemont's possible guilt. This would have to be decided during legal proceedings in Spain, they said.

However, they did defend the charge of "rebellion" against Puigdemont, saying that evidence provided by Madrid had shown "that the violence in Catalonia on election day can be attributed to the wanted individual."

Puigdemont was released on bail on April 6 after a court in Schleswig-Holstein ruled he could not be extradited for rebellion, as that was not actionable under German law. The court argued that the nearest German equivalent, high treason, was not applicable as Puigdemont had not caused or instigated violence.

However, even if the judges again throw out the rebellion charge as grounds for extradition, Puigdemont could still be sent back to Spain for trial on the lesser charge of illegally using public money to fund a referendum on Catalan independence.

On Tuesday, Catalonia's new separatist president, Quim Torra, named an administration that contains no detained or exiled former ministers, a condition set by Spain. This paves the way for Madrid to lift its temporary direct rule of the semi-autonomous region.

The Schleswig-Holstein state prosecutor is advancing his case for the extradition of former Catalan President Carles Puigdemont. However, the state's top court has ruled that Puigdemont cannot yet be rearrested. (22.05.2018)