German presidential election: A foregone conclusion in a moment of crisis | Germany | News and in-depth reporting from Berlin and beyond | DW | 12.02.2022

German presidential election: A foregone conclusion in a moment of crisis

The Social Democrat Frank-Walter Steinmeier has been reelected as German president delivering a widely-praised speech in the Bundestag. In an increasingly polarized Germany, his job could become more difficult. 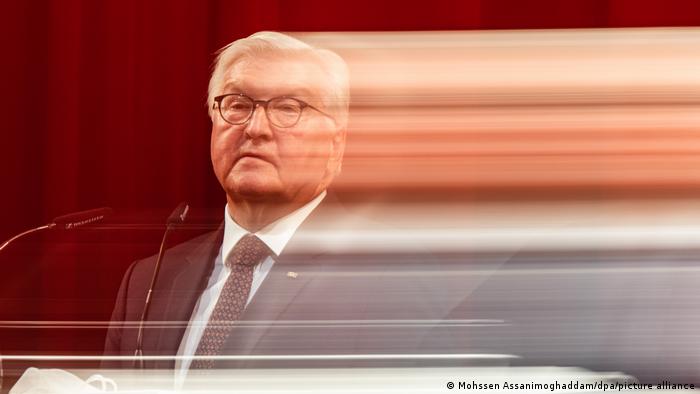 The German president is not as powerful as his counterparts in the United States, France and Russia

Frank-Walter Steinmeier was overwhelmingly re-elected as German president on Sunday, taking 1,045 of the 1,425 votes cast by the Federal Convention, a body that convenes every five years for this one purpose in the German parliament.

The result had been a foregone conclusion ever since December, when Olaf Scholz entered the chancellery and his coalition partners, the Greens and the Free Democrats, made clear that they would not oppose his candidacy.

If his election was a formality, however, the acceptance speech was more forthright than many expected. It included a direct appeal to Russian President Vladimir Putin, at whose door he put the responsibility for the current escalation at the Ukrainian border. "Undo the noose around Ukraine's neck!" he said. "And seek a path together with us that preserves peace in Europe!"

From there, the speech became a rallying cry for democracy. "My responsibility is to all the people who live in our country," he told the chamber. "Non-partisan, yes - But I am not neutral when the issue is democracy. Anyone who fights for democracy has me at their side. Those who attack it will have me as an opponent!"

When Steinmeier announced last May that he wanted to run for his office again, many saw it as an unusual gamble in the cautious world of German politics.

For one thing, an incumbent president rarely declares his interest in a second term so readily. Secondly, the then 65-year-old could have had no idea last year whether he could rely on a majority in the Federal Convention in this year's election.

At the time, his center-left Social Democrats (SPD) were lagging behind the center-right Christian Democrats (CDU) in the polls ahead of the September 2021 election. Had the conservative party won, it would probably have installed a presidential candidate of its own.

As it was, the campaign of CDU chancellor candidate Armin Laschet became derailed, and the SPD's Olaf Scholz became head of government against the odds. Scholz's chosen coalition partners, the environmentalist Greens and the neoliberal Free Democrats, were soon on board with a second Steinmeier term. The CDU, still nursing the wounds of the defeat, decided not to run its own candidate. 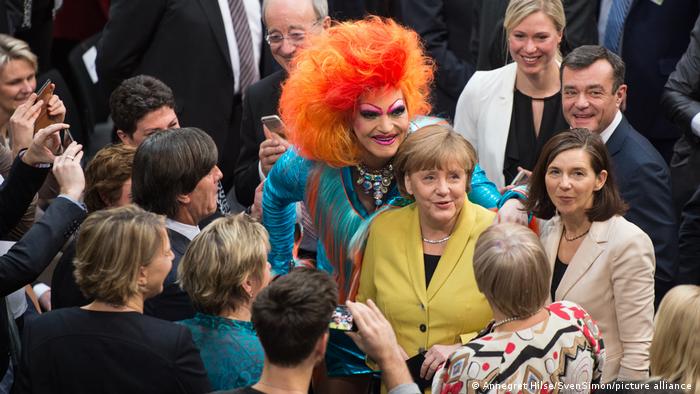 Stability is a plus

A total of 1,472 people formed the Federal Convention this year, comprised of all 736 members of the Bundestag plus another 736 people chosen by representatives of the 16 German states. As in most years, the latter group included celebrities and other prominent figures, including several athletes and actors, an astronaut, and a number of epidemiologists and health workers, named as a gesture of appreciation for their work during the pandemic. The oldest member of the assembly was 92-year-old Holocaust survivor Karla Spagerer, who survived a COVID-19 infection.

The convention's choice of Steinmeier is not a bad outcome, according to Uwe Jun, politics professor at the University of Trier. "The general opinion on Steinmeier is that he has performed his role satisfactorily in his first term," Jun told DW. "He's someone who is very down-to-earth, who can talk to different social groups. And he always hit the right tone in difficult questions, in crisis questions, in the coronavirus pandemic."

There have indeed been easier times to be German president, an office whose social role as a unifying figurehead for the nation usually takes precedence over its constitutional role.

"The president has to represent Germany both domestically and to the world, and he has to perform an integrating role," Jun said. "The latter has become more difficult because society is becoming more and more heterogenous and more polarized. Parts of society don't want to be seen to be represented by him."

"He plays an important function to society," agreed Ursula Münch, director of the Bavaria-based institute the Academy for Political Education. "And I would say that it has become more difficult for the president, because those who have lost faith in the political system will not trust the president as much."

A powerful office — but only in a crisis

The German president is not as powerful as his counterparts elsewhere, a legacy of the office's place in German history. The president of the Weimar Repubic wielded substantial power, and in 1933 the elderly "Reichspräsident" Paul von Hindenburg was persuaded to use it to pave the way for Nazi dictator Adolf Hitler to take over the country.

Nowadays the constitutional purpose of the president only rarely becomes obvious. He (and up till now it has always been a he) represents Germany as head of state, but makes no executive or policy decisions. He does, however, have constitutional powers to step in as arbiter when there is a political impasse: It is the president who decides, for example, whether the Bundestag must be dissolved if the chancellor loses a vote of no-confidence. He also has the power to veto laws if he believes they violate the German constitution.

"The founding mothers and fathers of the Basic Law consciously decided not to give the president major powers. It's an important position, but it's not a powerful position — unless the other institutions are in crisis," Münch said.

And such crises do happen, and indeed can happen more frequently now that there are more parties in the Bundestag, making majority-building more difficult. Steinmeier himself had to step in 2017 when Chancellor Angela Merkel failed to form a coalition with the Greens and the Free Democrats after her election victory. As that crisis unfolded, it fell to the president to decide against triggering new elections, therefore forcing Merkel to form another grand coalition with the Social Democrats.

Marginal candidates have a role

In theory, any German who is at least 40 years old is eligible for election. Candidates may be proposed by any member of the Federal Convention. If none of the candidates receives an absolute majority in the first and second ballots, a third ballot is held. In this case, a relative majority is sufficient. New candidates can also be nominated for the second and third ballots.

Another element of the president's social role arises from his independence from government, something that allows him to raise awareness for issues that may not be on the agenda for the parliament or the government.

That is also true of the election itself, which always includes extra candidates who stand no chance of winning, but who can use the opportunity to make a point.

This year's election included three other candidates: Gerhard Trabert, a doctor nominated by the socialist Left party; Max Otte, a CDU member nominated by the far-right Alternative for Germany (AfD); and Stefanie Gebauer, a 41-year-old physicist with the regional center-right Free Voters party.

"It's always been a part of the presidential election that there were alternative candidates — that is important," said Münch, who thinks that the Left party's candidate, Trabert, was a "skillful, clever choice."

"Of course, he won't become president, and he doesn't want to — he wants to carry on working as a doctor helping the disadvantaged," she said. "And he can use the election to draw attention to the fact that there are issues and social groups who we and the media are too often only marginally aware of."

The AfD, meanwhile, appeared to have a different goal in choosing Otte: provoking its political rivals. Otte is a member of the CDU's nationalist-leaning wing, the WerteUnion (Values Union), and the AfD was apparently hoping to use his candidacy to suggest that some CDU voters might be more at home with the far-right party.

But these sideshows, important as they might be as illustrations of the political landscape, will not concern Steinmeier as he begins his second term as Germany's head of state.

Edited by: Rina Goldenberg. This article was updated on February 14.

Germany's official head of state, the country's presidents have filled their time issuing certificates and giving speeches. Shocked by the atrocities of the Nazi regime, presidential powers were intentionally limited.

A few years ago he wanted to be chancellor and lost to Angela Merkel. Now Frank-Walter Steinmeier may be Germany's next president. He has 20 years of political experience as a member of Germany's Social Democrats (SPD).