Joachim Gauck has delivered a speech in the Bundestag honoring victims of war for Germany's National Day of Mourning. His words carried a special resonance following the terrorist attacks in Paris. 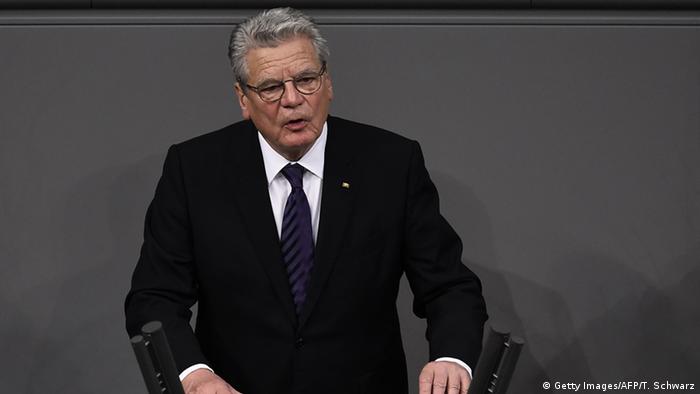 The German president delivered a speech in Berlin on Sunday in which he spoke of "a new kind of war," in reference to the massacre in Paris on Friday night.

"We live in times in which we honor the victims of a new kind of war," Joachim Gauck told an audience of his fellow politicians in the Bundestag.

His speech was meant to commemorate Germany's National Day of Mourning, an occasion that honors the victims of war. But it carried a special resonance this year, coming less than two days after the most brutal terrorist attack in France's history.

"The community of democrats is stronger than the globalization of hatred," he said in front of an audience of his fellow politicians.

"In the face of destruction and death, in this moment of need and mourning, we sympathize with our neighbors across the Rhine."

Europe in shock as possibility of broader war looms

Gauck's speech came as politicians across Europe and the world consider the next steps they will take in response to this weekend's tragedy. Following claims that the "Islamic State" (IS) militant group was responsible for the attack, many governments are mulling a new strategy to end the ongoing conflict in the Middle East.

European ministers on Sunday announced they would hold crisis talks on Sunday to discuss the implications of the terrorist attacks on their security strategy.

As the shadow of an intensified conflict in the region looms over Europe, Gauck also paid tribute to German soldiers who had died while stationed abroad. Germany still has troops in Afghanistan and announced recently it was planning to send more troops there over the next year.

Obama vows to 'redouble' fight to eliminate IS at G20 Summit

World leaders condemned the Paris attacks and urged joint anti-terrorism efforts at the G20 summit in Turkey. At the same time, UN chief Ban Ki-moon warned against perpetuating "the cycle of hatred and violence." (15.11.2015)

At least one German among Paris dead

The Paris terror attacks have claimed a life of at least one German national, according to the Foreign Ministry in Berlin. Officials also said the identification process for the Paris victims was not yet complete. (15.11.2015)

French officials have named the first shooter from the deadly attacks in Paris. He was reportedly identified by a severed finger found at the Bataclan hall. Meanwhile, police say they have found a car used in the attack. (15.11.2015)