German President Frank-Walter Steinmeier, who's currently in Warsaw, said a trip to Ukraine suggested by his Polish counterpart "wasn't wanted" by Kyiv. He has been criticized for his closeness to Russia. 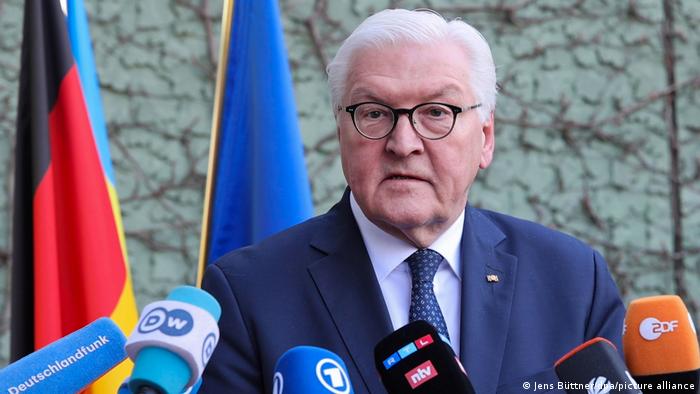 German President Frank-Walter Steinmeieron Tuesday said a proposed trip to Kyiv had been rejected by the Ukrainian leadership.

Steinmeier had been planning to make a joint visit to Ukraine with Polish President Andrzej Duda and their Estonian, Lithuanian and Latvian counterparts "a strong signal of joint European solidarity with Ukraine."

But "that apparently wasn't wanted in Kyiv" Steinmeier said while visiting the Polish capital Warsaw.

Ukraine has previously been highly critical of the German president over his connections with Russia and the leading role he played as former foreign minister in improving relations with Russian President Vladimir Putin.

What was Steinmeier doing in Warsaw?

According to the Office of the Federal President, the visit to Poland was intended to illustrate that the Germans and Poles stand together at the side of Ukraine after Russia invaded its neighbor on February 24.

He was scheduled to visit the Polish capital at the end of March, but the trip was canceled after his wife, Elke Büdenbender, tested positive for the coronavirus.

Büdenbender is accompanying her husband, and the pair was received by Steinmeier's Polish counterpart, Andrzej Duda.

The war in Ukraine is expected to be the trip's main focus.

The couple will also meet Ukrainian refugees and volunteers in Poland after the country took in more than 2.6 million people seeking protection from the conflict in their homeland.

Melnyk told the Tagesspiegel newspaper that the German president had not been serious about his break with Russia. He added that people connected to Steinmeier like Jens Plötner, foreign policy advisor to Chancellor Olaf Scholz, and State Secretary in the Ministry of Foreign Affairs Andreas Michaelis, as well as many important ambassadors, also share Steinmeier's close relations with Moscow.

Steinmeier was close to former Chancellor Gerhard Schröder, whose ties to Russia after retirement have become increasingly notorious. He also had two stints as foreign minister before becoming president, including when Crimea was annexed.

Kaczynski was also critical of Berlin's foreign policy in Welt am Sonntag, where he said Poland "is not pleased with Germany's role in Europe."

Three German lawmakers are headed to the Polish-Ukrainian border on Tuesday having spent Monday evening in Warsaw.

DW's correspondents have been reporting from the Ukrainian capital, Kyiv, the western city of Lviv and countries bordering Ukraine. Watch their latest impressions from the war.