Dortmund police have asked the public to ID a man with severe amnesia found in a freight train with just books and an asthma spray. He is otherwise of sound mind. The only thing missing, police say, is his memory. 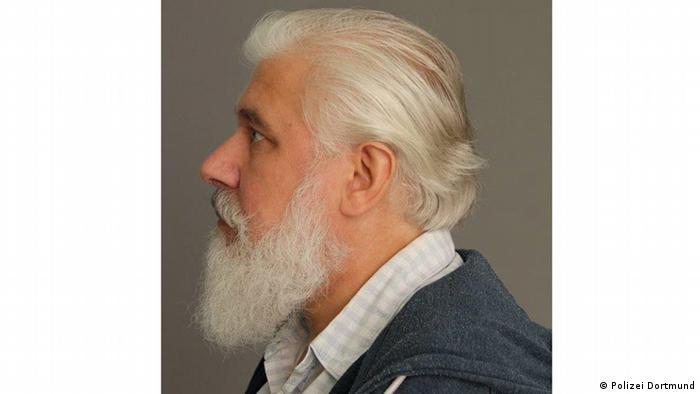 (Editor's note, August 11, 2017: The police appeal swiftly delivered results, and it transpired the man had not strayed far from home. A cinema operator in Dortmund recognized the man and identified him as a 57-year-old from the city. Authorities did not release further information on his identity; the man is receiving psychiatric care.)

After months of nationwide police investigations turned up fruitless, authorities in Dortmund turned to the public on Thursday for help in identifying a man who cannot remember who he is.

In a statement, police published a picture of the white, bearded man in profile (pictured above). They referred to him by the provisional name Herr W. or Mr. W.

Police found Mr. W. at the beginning of April in a parked freight train car at Dortmund's main train station. He had no money, no ID card and no clue who he was or how he came to be in the train wagon, according to the statement.

The only items the man had on him were in a brown bag, namely an asthma spray and four books - three of which were historical biographies on figures in the Habsburg family, one of Europe's most influential royal houses, most closely connected to Austria.

When police asked who he was, he told them he was King Ludwig of Bavaria, reported regional public service broadcaster WDR.

Authorities then brought the man to a hospital for physical and psychiatric assessments. After three days, Mr. W.'s condition improved, but his memory did not return.

With the help of a memory researcher and other specialists, he was diagnosed with dissociative amnesia, police said.

"Whenever I try to remember, it's foggy," the man told WDR, adding that he often feels lonely.

The rare disease results in memory loss and is often triggered by overwhelmingly stressful or traumatic events. Knowledge obtained from school and other areas in life may remain, but personal memories remain out of reach.

A new identity while searching for the old

In their statement, police describe the man as "educated, friendly and in full possession of his mental faculties."

WDR reports that Mr. W. can paint well, loves classical music and is very religious. During Catholic mass, he knows all the words to the prayers and the songs.

He also speaks with an accent from Hesse, indicating he might have been born or spent a long time in the central German state whose largest city is Frankfurt. The clues so far have failed to bring any conclusive information on the man's identity.

Dortmund police are asking anyone who might recognize Mr. W. or have information to call the following number: +49-231-132-7441.

For now, the city of Dortmund has offered to help Mr. W get back on his feet. The city has issued him a new identity and offered social aid as well as a small apartment for him to stay in while the search for his identity continues.