A 30-year-old man allegedly attacked passengers on a bus that was traveling to Serbia, prompting a standoff with the police. The vehicle was eventually seized. 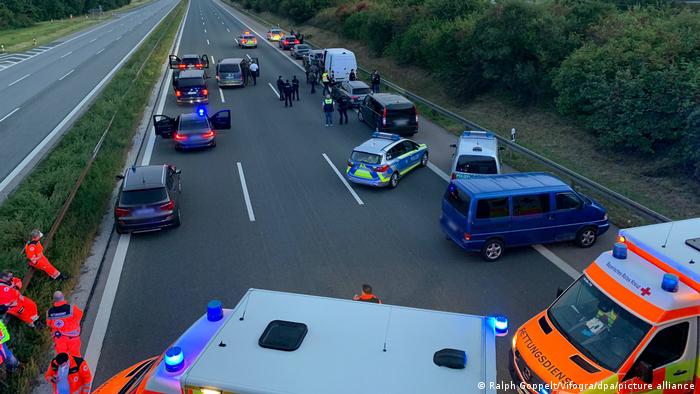 The incident occurred on the A9 highway in Bavaria

A section of highway in southern Germany was closed Tuesday evening after an altercation on a bus and an ensuing standoff, police said.

German police later said they arrested a 30-year-old Serbian national. The man allegedly kicked and uttered death threats towards fellow passengers while on board a Serbia-bound bus.

According to police, the man abruptly attacked a 20-year-old who was sleeping in front of him. The onslaught included kicking the victim, who was later released from hospital after receiving several blows to the head.

In addition, the alleged perpetrator hit a 24-year-old woman in the face.

Police said in a statement that the fight escalated into a "threat situation."

The police said it was not clear if the man was armed.

A police spokesperson said the vehicle was eventually seized at around 9.30 p.m. local time (1930 GMT).

The spokesperson added that officers used equipment to disorient and temporarily blind the suspect in order to subdue him.

"The perpetrator was arrested," local police said on Twitter. "A weapon has not been found so far. The bus is still being searched. Forensics are being carried out on site."

The A9 highway was initially closed in both directions between Hilpoltstein and Greding, in Bavaria, but later reopened.

The Left Party and its anti-military unique selling point