German plan to jail ′johns′ stirs debate on forced prostitution | Germany | News and in-depth reporting from Berlin and beyond | DW | 06.04.2016

A German plan to jail men who use forced prostitutes has revived a debate about European attitudes to prostitution. While some call for a total ban, others believe full legalization is the only route. 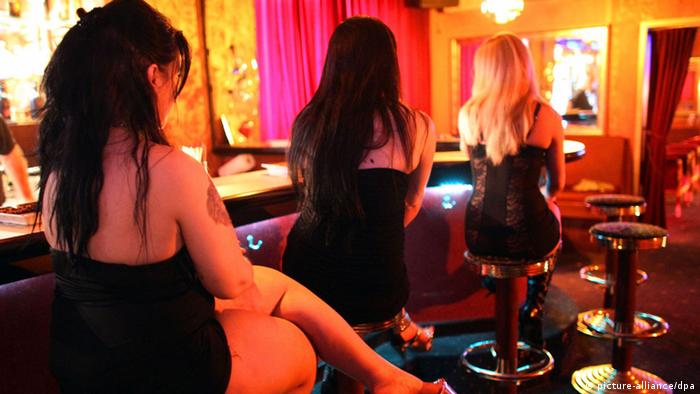 The German cabinet on Wednesday agreed to push ahead with a law that would see "johns" who go to forced prostitutes in Germany face between three months and up to five years of jail time.

Speaking ahead of the meeting, Justice Minister Heiko Maas said on Tuesday that the law was meant to have a "preventative effect" to deter those who would be clients of prostitutes, who are victims of human trafficking. "As a state, we made a decision that we do not accept and also do not tolerate such a thing," he declared.

The latest German legislation, which would also see pimps jailed for up to 10 years, comes as part of an EU directive aimed at combating human trafficking. However, the way that countries might opt to do that is very different, particularly when it comes to the world's oldest profession. 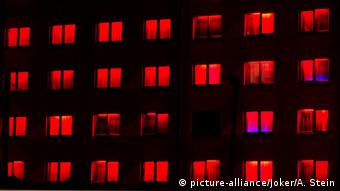 Opponents of the law say it will change nothing, and Germany will remain 'the brothel of Europe'

The Nordic model operates in Sweden, Norway and Finland as well as Northern Ireland. While it's legal to sell sexual services, buying them is expressly prohibited. Although somewhat counterintuitive, the model's proponents claim it deters men from seeking out sex for sale without criminalizing sex workers.

The Dutch model, on the other hand, legalizes prostitution. Supporters say this allows for greater regulation and protection of those who might be vulnerable.

Opponents are doubtful of this claiming that almost all prostitution is, essentially, forced. "Prostitution cannot be separated from forced prostitution in day to day life and reality," said Sabine Constabel, of the abolitionist group Sisters e.v, speaking to the same German morning talk show that had earlier interviewed Maas. The new law, said Constabel, was unrealistic - it would simply be too difficult to prove that a client had knowledge of the victim's plight. Germany would continue to be the "brothel of Europe."

For Aidan McQuade, director of the group Anti-Slavery International, the proposed law would see Germany sitting between the Nordic and Dutch models with the client bearing a greater weight of legal responsibility. 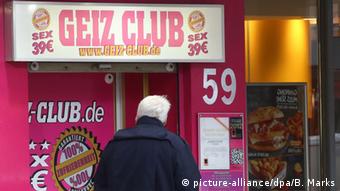 "The Nordic model makes illegal purchase of sex," McQuade told DW. "The Netherlands had a much more permissive legal environment for sex work. With a German law that explicitly makes forced prostitution illegal it seems to be steering a course between those two opposites."

Advocating the Dutch model is Amsterdam-based La Strada International, which campaigns against human trafficking. The group's international coordinator, Suzanne Hoff, told DW that sex work should be no different to any other industry.

"Traffickers should be prosecuted, and also those assisting traffickers," said Hoff. "For example if a taxi driver is bringing someone from A to B at the request of a trafficker, knowing about the intention of exploitation, he can be charged as well for involvement in human trafficking."

But while Hoff agrees with the law concerning the traffickers themselves, she has more reservations when it comes to how the law should deal with clients. Legislation across Europe is varied. Some member states, such as the United Kingdom, have criminalized the use of prostitution services if they are delivered under coercion or force.

A question of proof

In Britain, this is a strict liability offence - meaning ignorance of that the woman was coerced is no defense. In other countries, like the Netherlands, clients are instead called upon to indicate possible victims of trafficking to the police. However, it has proven difficult for clients to correctly distinguish women providing the services voluntarily from those who are forced into prostitution. 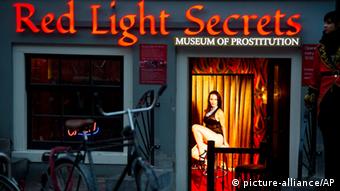 Amsterdam - with its relaxed but regulated approach, has become famous for its red light district

"If people willingly and knowingly use the services of exploited and trafficked people they can be prosecuted, too," says Hoff. "However, in practice it is difficult to define whether a person knew that the services were offered by force. Therefore we are against criminalizing clients of sex workers. Similarly we are also not criminalizing those who buy a pair of jeans that is possibly made by forced labor."

German police have said that it might be difficult to prove that a client had knowledge that a woman was being forced to work as a prostitute, at least in some cases. However, Anti-Slavery International's McQuade believes that, in a reasonable number of instances, it would be feasible.

"A similar situation would be the receiving of stolen goods," said London-based McQuade. "There are certain circumstances where it's reasonable to believe that someone should know, for example if they were offered a Picasso for 10 pounds. If someone is having sex with a woman and the windows are barred, it's grotty and there's a sense of menace, it should be indicative that this isn't a happy place."

Similarly, Justice Minister Heiko Maas on Tuesday insisted the law would be effective, because of "numerous circumstantial clues" which make it evident that the prostitute is not a willing sex worker. He ruled out a general ban on prostitution along the Nordic model.

The German government also hopes that the law will prove a boon to uncovering trafficking, with clients who report their suspicions about forced prostitution escaping prosecution.

However, that doesn't go far enough according to Naile Tanis, of KOK, a German NGO network against trafficking in human beings. Tanis says the German law lacks support for victims who find themselves as witnesses against their former tormentors.

"For us it's one step that we have to get a better criminal law, but we also have the perspective of the victim," said Tanis.

"The victims should have the right to stay in Germany if they are identified as a victim of human trafficking from abroad. Also it's important that they should have a better right to compensation."

"We think it's important to get good stabilized witnesses for trials. If you give them more rights and stabilize them, you have better witnesses and a better focus on combating trafficking."

The capture of the key northern city is another major setback for the Afghan government. Meanwhile, Taliban forces have reportedly reached the outskirts of Kabul, as embassies prepare to evacuate staff.

Jerusalem tensions: Rockets fired as unrest spirals — As it happened 10.05.2021

The holy city, which contains sacred sites for Jews, Muslims and Christians, has been rocked by violence over the past three days. Hamas has launched a rocket attack at the city in the latest escalation of tensions.