The Bundestag is debating the future of prenatal trisomy blood tests. The tests are less invasive than the current checks, but are not yet generally available through health insurance without extra payments.

Members of the Bundestag are holding a two-hour debate on prenatal genetic blood tests on Thursday morning.

The debate is not based on a bill but will serve as a guide for lawmakers on the benefits of non-invasive blood tests for the diagnosis of trisomies such as Down syndrome. They will also discuss the question of whether prenatal trisomy blood tests should be paid by health insurance companies in the future.

Health Minister Jens Spahn has spoken in favor of the tests as they are less risky than the amniotic fluid examinations, the costs of which are already covered by health insurance companies in certain cases — either for the over 35s or for women who have previously borne children with chromosomal abnormalities.

Opponents of insurance reimbursement for the tests say they could lead to more tests being carried out, and ultimately to more abortions.

No decision or vote will be taken in the Bundestag on Thursday. The tests' inclusion under health insurance rests with the Federal Joint Committee (G-BA) of the health service.

Trisomy tests involve a blood test that analyzes DNA from the baby that has passed into the mother's bloodstream. It is carried out after 9 weeks and is more than 99% accurate for detecting trisomy 21 or T21, also known as Down syndrome.

While the trisomy tests are available at cost to the patient in Germany, other, invasive tests carry a slightly greater risk to the fetus than screening tests, according to the Eunice Kennedy Shriver National Institute of Child Health (NIH).

Prenatal diagnostic testing for Down syndrome involves removing a sample of genetic material which is then checked for Down syndrome. The NIH describes three tests used for extracting samples: 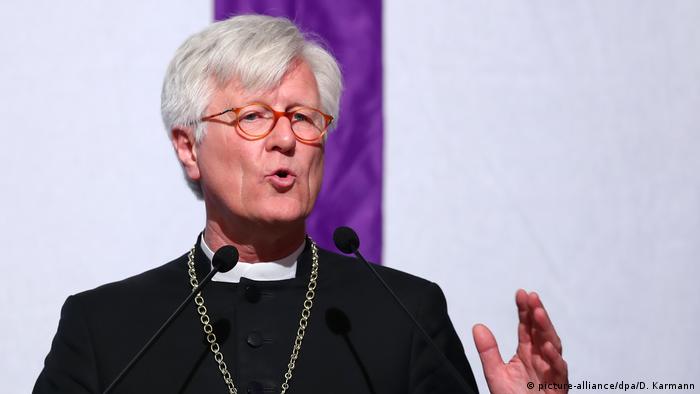 Heinrich Bedford-Strohm, Chairman of the Council of the Protestant Church

Heinrich Bedford-Strohm, Chairman of the Council of the Evangelical Church in Germany said there was a need for regulation: "It is crucial for me that we stick to the absolute goal of minimizing the number of abortions," he told the Funke Media Group on Thursday.

The head of the Berlin office of the Catholic Bishops' Conference, Prelate Karl Jüsten, said trisomy blood tests should not be paid for by health insurers. "We appeal to the deputies of the German Bundestag not to take any decisions that could result in an increase in the number of abortions," he told daily Stuttgarter Nachrichten.

The number of employees in Germany who were written off sick rose by 60 percent in recent years — especially those with mental health complaints. Despite this, the German government has said there's no reason to panic. (21.09.2018)

For those seeking psychological help in Germany, it can take months before a spot in therapy opens up. Online therapy can reduce waiting time, but only a handful of health insurance companies currently cover the costs. (03.08.2018)