The German parliament has approved new legislation that will enable lawmakers to ratify the so-called Lisbon Treaty. The accord is designed to streamline operations for the further integration of the European Union. 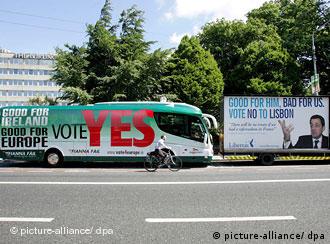 The Irish have already voted 'no' once

The vote was necessary after the country's highest court in June ruled that an existing German law intended to allow lawmakers to ratify the treaty had to be amended to give parliament more decision-making powers in Brussels.

The Lisbon Treaty must be ratified by all 27 member states of the European Union before it can take effect. Aside from Germany, the ratification process must still be completed in Ireland, the Czech Republic and Poland.

The legislation, passed on Tuesday, now goes to the upper house of parliament, the Bundesrat, where representatives of Germany's 16 states are scheduled to vote on it on Sept. 18.

If it passes there, as expected, the law then goes to President Horst Koehler, whose signature would make Germany's ratification of the Lisbon Treaty official.

Germany's ruling parties removed a key hurdle blocking the passage of the EU's Lisbon Treaty after a deal was struck late Tuesday, increasing hopes that the treaty can be ratified in Germany before the upcoming election. (19.08.2009)

Those hoping that a second Irish referendum on the EU's Lisbon Treaty will remove one of the largest stumbling blocks to the EU reform document’s ratification will be disappointed by news that has come out of Dublin. (04.09.2009)