Germany's ruling parties removed a key hurdle blocking the passage of the EU's Lisbon Treaty after a deal was struck late Tuesday, increasing hopes that the treaty can be ratified in Germany before the upcoming election. 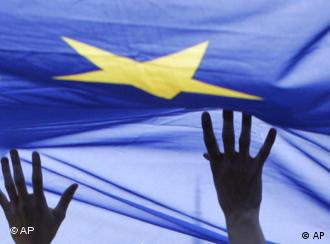 Ratification of the Lisbon Treaty is still not certain, but within reach

Hartmut Koschyk of the conservative Christian Social Union (CSU), one of three parties in Chancellor Angela Merkel's "grand coalition" government, said the parliamentary groups of Germany's main political parties had agreed on a draft law that would protect national powers within the EU.

Germany's top court had ruled in June that the Lisbon Treaty - aimed at streamlining decision-making in the 27-nation EU - must be put on ice until legislation guarding national parliamentary powers was passed. The draft law will now fulfill the constitutional court's requirements.

"We have now reached an accord on a legally binding, far more comprehensive law," Koschyk said.

Norbert Roettgen, the conservative bloc's parliamentary leader, added: "Basically, we have agreed (on new legislation) in political terms," he said, saying the aim was for the main five parties to agree on the law to ensure its smooth passage through parliament in September.

The new law would oblige the government to inform parliament "thoroughly and as early as possible" about European Union intergovernmental business, said Roettgen.

There were concerns that German ratification might be delayed until after the Sept. 27 election as some politicians in Merkel's conservative camp demanded bigger changes to the text.

The new deal appears to stop short of the demands made by the CSU, the Bavarian sister party of Chancellor Angela Merkel's Christian Democrats (CDU), which had used the court ruling to push for greater parliamentary influence over German decision-making at EU level.

The new legislation also appears to nix the CSU's more controversial demands, including requiring the government to consult the German parliament in EU negotiations and requiring referendums before the bloc can accept new members. 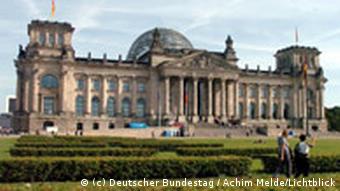 Parliament will be able to discuss German EU interests

The CSU also failed in its efforts to grant Germany's Constitutional Court the last word on interpreting the Lisbon Treaty, said Roettgen.

Under the new rules, the lower house of parliament, the Bundestag, would get access to all relevant documents, and parliament should be able to issue a view on any subject the government is discussing at EU level.

While these views would not be binding, as the CSU had demanded, and the government would be completely free to act, it would have a duty to justify its decisions to parliament, said Roettgen.

Despite giving worried Eurocrats some hope that the Germans will solve their problems before the country goes to the polls, the deal is not yet final. The draft law still has to go before the Bundestag on September 8 and then the Bundesrat upper house on September 18, nine days before the German general election.

EU officials fear that if Germany fails to approve the bill before the German election, it could bolster opponents of the treaty in the three other states that have yet to endorse it: Ireland, the Czech Republic and Poland. 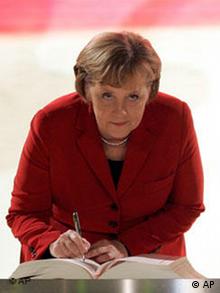 Only Ireland is constitutionally bound to put it to a referendum, which is to be held on October 2.

Luxembourg's Prime Minister Jean-Claude Juncker said last week the changes demanded by some Germans threatened to bring "sclerosis" to the bloc and were a graver problem than Ireland's looming vote.

All 27 members have to ratify the treaty for it to take effect and a long delay would have been an embarrassment to Merkel, who spearheaded efforts to reach a deal on the treaty in 2007.

The Lisbon Treaty is designed to facilitate decision-making in an EU which has expanded to encompass several former communist countries in Eastern Europe as well as Malta and Cyprus.

The bloc has almost doubled in size since the current Nice Treaty came into force.

If the Lisbon Treaty were to replace it, the EU would do away with the current unwieldy system of the rotating presidency in favor of the selection of a leader for a limited term. A powerful foreign policy supremo would also be appointed.

The treaty itself is a watered-down version of the European constitution that was rejected by voters in France and the Netherlands in 2005.