German nuclear energy history: a timeline | Germany | News and in-depth reporting from Berlin and beyond | DW | 30.05.2011

Germany's reaction to the nuclear catastrophe in Japan marks a drastic policy reversal. The first German nuclear reactor went online in 1962. The last one is now bound to go offline 60 years later. 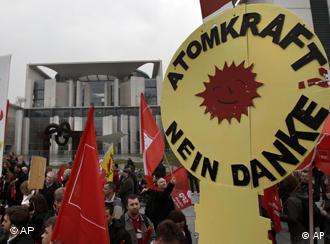 June 2000: Schröder's government and the atomic industry agree on a nuclear consensus, a step-by-step nuclear phaseout by 2021.

July 2005: Germany ends all nuclear waste shipments to Britian's Sellafield reprocessing plant and La Hague in France. Reprocessed nuclear material may only be shipped back to Germany. There are two interim storage sites, but no permanent storage site for the waste.

September 2010: The Christian Democratic-Free Democrat coalition under Chancellor Angela Merkel approves the extension of the lifespan of Germany's nuclear reactors by an average of 12 years, with the last one to shut down in 2036. Germany has 17 nuclear reactors.

May 2011: The German government agrees to shut all its nuclear reactors by 2022. The eight oldest are to remain permanently shut, another six are to be taken offline by 2021. The remaining three most modern reactors are to stay online for another year until 2022.

Demonstrators across Germany are calling for an immediate end to nuclear power after an official commission recommended a decade-long phase out. Some members of the government are concerned about the economic impact. (28.05.2011)

Nuclear power provides 40 percent of Switzerland's electricity. But under pressure from growing anti-nuclear sentiment, the government has proposed a complete phase-out by 2034. (25.05.2011)

A report on how well Germany's nuclear power plants would withstand a range of disaster scenarios has revealed they may be vulnerable to attack. However, experts did not call for any urgent closures. (17.05.2011)