The fire, started by Germany's military testing rockets in the area, was expected to take a week to extinguish, an on-site firefighter told DW. Defense Minister Ursula von der Leyen visited the region to see for herself. 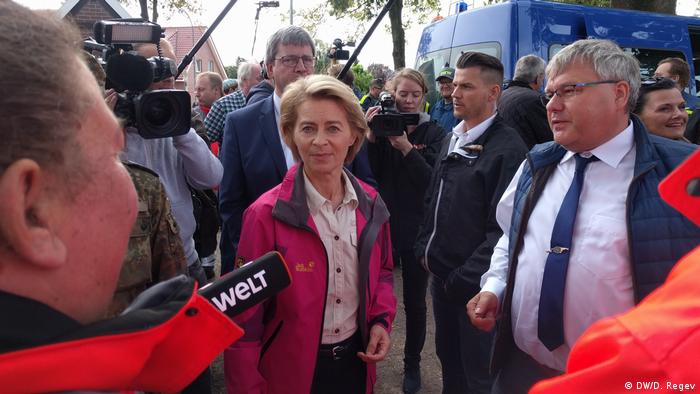 Germany's Defense Minister Ursula von der Leyen traveled to the area on Saturday, surveying the damage and meeting with local officials. She thanked emergency response teams for their work and also praised support from civilians. However, she emphasized, "We haven't yet reached the end."

"We've still got to hang in there for a while," she added in her remarks to the press.

Authorities in the German state of Lower Saxony said on Friday that up to three towns near the site of the moorland fire at a Bundeswehr testing facility may have to be evacuated. 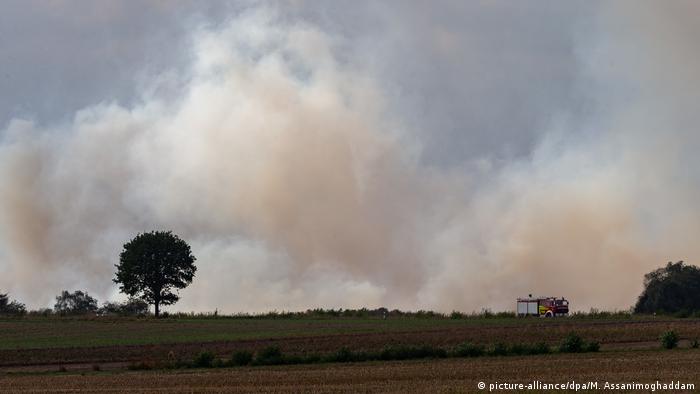 Smoke from the moorland fire near Meppen, in northwestern Germany close to the border with the Netherlands.

The head of the Emsland district authority, Reinhard Winter, said it could no longer be ruled out that the approximately 1,000 residents of the towns of Gross Stavern and Klein Stavern just over 15 kilometers to the northeast might have to be taken to safety.

"It, of course, depends on how firefighting efforts go on the Bundeswehr terrain and on the changing weather conditions as to whether there has to be an evacuation at all," Winter said.

He said stormy conditions, such as 85 kph (52 mph) winds, meant that smoke and flying sparks could increase.

A firefighter brought in from Hanover told DW that it could take weeks to extinguish the blaze.

"I expect to remain in the area for at least one-and-a-half weeks — if not more. We were not told how long it may take, and a lot depends on the weather. All I can say is that we're talking about weeks — not days," said the firefighter, who asked to be identified only as Timo N.

Local official Marc-Andre Burgdorf said the residents of the two towns "are advised to keep calm, but should pack up the most important documents such as IDs, as well as necessary medications, just in case."

Later in the day, authorities in the district of Emsland said that 7,500 people living in the area of Sögel might also need to be moved.

Prosecutors in Lower Saxony said they were investigating the possibility of "negligent arson."

So far, smoke has been detected more than 100 kilometers (62 miles) from the site of the fire near the town of Meppen, causing residents to complain. 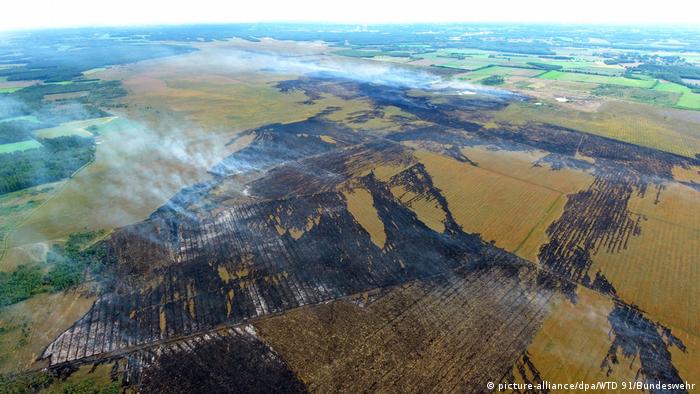 Aerial shot of the area burned in the Meppen fire

"The real question is how such a routine exercise leads to such a disaster," 42-year-old Marina Alke told DW. "We are given no explanations for how and why this has happened, and worse than that, why there are no solutions to such cases. If the military knows how to start a fire, it should also know how to extinguish it."

The fire broke out more than two weeks ago after helicopters fired rockets over the moor as part of a drill. Usually, special fire engines are employed to douse the flames ensuing from such tests, but one was out of action and the other undergoing maintenance work at the time.

Von der Leyen apologized in the name of Germany's Bundeswehr "to all of the people in the region suffering the effects of the fire. Speaking to the Neue Osnabrücker Zeitung on Friday, she said the moor fire was "a very serious incident that must not happen this way."

The Bundeswehr has been criticized for conducting the tests amid the extremely dry summer conditions. The moor is made even more flammable by its peat reserves, which can lead to smoldering fires underground that are hard to detect and fight.

The situation is made yet more dangerous by unexploded ordnance buried in the soil of the area, which has been used by the German army since 1876.

DW's Dana Regev contributed to this article from the scene. 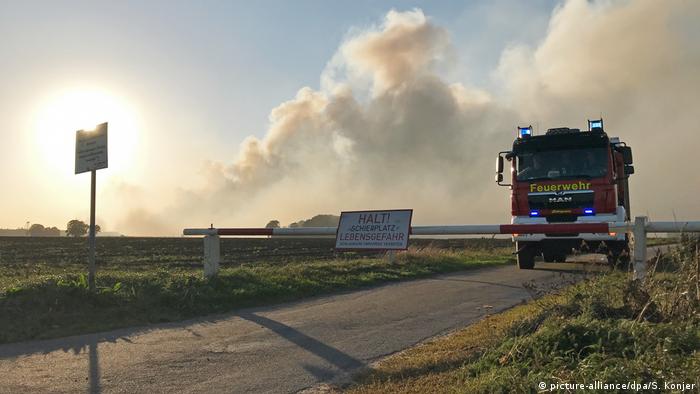 Hundreds of firefighters are on the scene, assisted by Bundeswehr personnel