Germany's top ministers toured South Africa this week to focus on projects funded by German aid money as well as economic ties. The high-profile visit highlighted the strong links between the two nations. 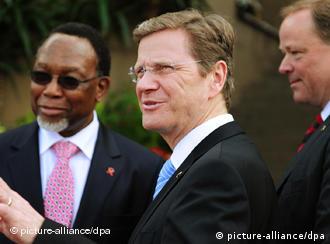 The strong ties were reinforced this week during a visit to South Africa by German Foreign Minister Guido Westerwelle and Development Aid Minister Dirk Niebel. The high-profile ministerial visit underlines the importance that the German cabinet places on this special relationship.

For Germany, South Africa is both a developing country and an economic partner. For South Africa, the relationship with Germany is hugely important – it's the largest investor and the second largest trading partner in the country. The two nations support each other on the international stage on issues such as the expansion of the UN Security Council or peacekeeping operations in Africa.

"We have a strategic partnership with South Africa which we want to further intensify," foreign minister Westerwelle said. "The bilateral relations between our countries are excellent, but also coordination and cooperation in the global context. "

The two sides reviewed governmental development aid initiatives at a meeting in Johannesburg. The German government announced it will support the emerging economy in South Africa with 112 million euros ($151 million) over the next two years. 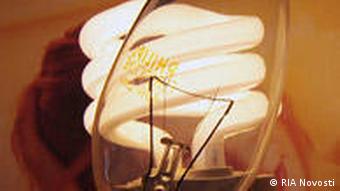 Development Minister Niebel said success was not just measured by money, but also through the new projects that Germany is supporting. One area in particular that German development cooperation is focusing on is renewable energy. Niebel announced a special budget of 75 million euros to focus on renewable energy and energy efficiency in South Africa.

"That would ensure South Africa gets a better energy supply and allow the country to grow economically and better fight poverty," Niebel said. The minister didn't shy away from mentioning Germany's economic interest in bolstering South Africa's energy sector. "It also aims for sophisticated technologies in South Africa that could be for example acquired in Germany," he said.

"As we know from other countries in Africa, many governments deal with this issue very carefully. I consider it a strong signal from the South African government that they are developing ownership of this topic," Niebel said. 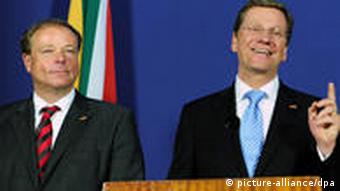 The two countries differed on only a few areas – such as addressing the situation in Zimbabwe. When questioned about Zimbabwe by journalists, the South African Deputy President Kgalema Motlanthe refused to answer, while Westerwelle strongly condemned the Mugabe regime.

"The situation there has remained unchanged. We're monitoring it with great concern," Westerwelle said.

But that was one of the only disagreements in a meeting marked by a show of cordiality and friendliness.

But the German development minister did point out that the two sides had failed to see eye to eye on a crucial issue at a time when South Africa gears up to host the soccer World Cup in June.

"We could not agree on who will win the World Cup: Germany or South Africa," Niebel joked.

Westerwelle calls for action against piracy during visit to East Africa

During South Africa's pre-democratic era, right-wing leader, Eugene Terre’Blanche, threatened to throw the country into anarchy on the eve of its historic first elections. His death threatens to trigger yet more unrest. (07.04.2010)