From abuse on the web to attacks on the SPD office in Wuppertal, threats of death and mutilation are a regular experience for the parliamentarian and anti-racism campaigner Helge Lindh. But giving up is not an option. 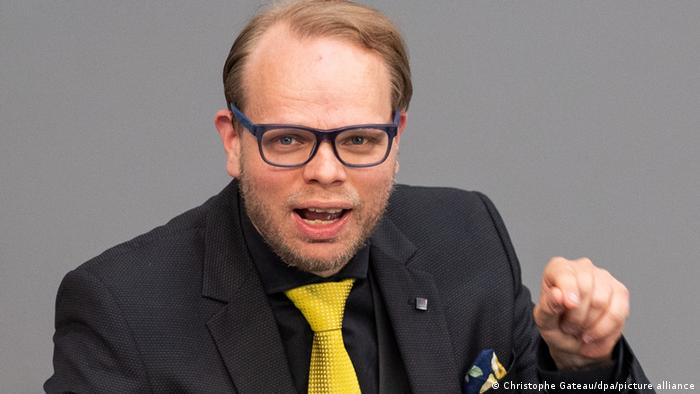 "I don't want to be a victim because of my role; I make no concessions to hate and fear," Lindh says

Helge Lindh has vowed not to back down against hate speech online, but he can't even remember when he received the first death threat. Was it September 2018? Or October?

At the time, Lindh had fished a letter out of his mailbox. It was long, threatening, neatly written by hand and almost meticulously complemented with newspaper clippings. And it was the first time that someone had threatened the member of the Social Democrats (SPD) in no uncertain terms: "Keep it up and I'll kill you!"

A digital death threat followed in February 2019. At 3 a.m., hours after Lindh had discussed racism with a Black German activist on television, he received the news that there was a bounty on his head and that he had been cleared for execution. "The aggression and concreteness with reference to the interview was even more violent than the message itself, because the death threat was available everywhere on the web," Lindh said. "It seemed very professionally organized by a right-wing network, and that then has its own quality."

Lindh, 44 and a member of the Bundestag since 2017, ticks all the boxes to make him  a prime target for violent German nationalists. He advocates a humanitarian refugee policy, has repeatedly denounced racism and antisemitism in public, and campaigns actively for the peaceful coexistence of cultures within Germany. His email address on the internet, as is the address of his party office in Wuppertal, where paving stones were thrown through the windows — accompanied by a note from apparently left-wing actors denouncing racism in the migration policy of the federal government, in which the SPD is the junior partner to Chancellor Angela Merkel's Christian Democrats (CDU).

As casually as if he were talking about the weather, Lindh said he had received scores of threats, some pledging to mutilate him and others to make him the next Walter Lübcke, the regional politician shot and killed point-blank in his garden by a neo-Nazi. "I've always had pretty good armor," he said. "By now I'm pretty hardened: I've learned to live with my fear. Of course you get more nervous and anxious. You smell a threat everywhere."

Lindh simply deleted many of the messages; he sends others to the nongovernmental organization Hate Aid, a counseling center for victims of digital violence, which prosecutes the perpetrators under criminal or even civil law. The death threats go to the security forces.

Many people withdraw from online interactions out of a sense self-preservation after receiving internet abuse. Others become more cautious in their public statements so as not to "provoke" further attacks. Lindh refuses to be intimidated.

Invoking the credo that "attack is the best defense," Lindh makes the abuse that he receives public and denounces it. "I don't want to be a victim because of my role," he said. "I make no concessions to hate and fear."

Lindh said he would continue to take on his tormentors. "To those who want to humiliate or intimidate me, I don't allow them the triumph, I don't let them win," Lindh said. "After all, many are expecting such threats to be kept secret."

Twitter even deleted one of his posts in which Lindh published excerpts of a letter threatening to murder him, calling the content extremist and too cruel. His tweet has been restored.

Lindh said the nationalist Alternative for Germany (AfD) — which he called a party with "a political finger on the trigger" — had created the climate for internet abuse. Party members have grown wary of Lindh's appearances at the lectern in the Bundestag.

In January, when the AfD sought to declare 2021 the "Year of the German Language," Lindh denounced the party with a speech entirely in rhyme. In April, the AfD call for a "National Action Plan for Cultural Identity," and Lindh countered by denouncing them in a new version of Goethe's Faust.

Lindh has had to pay a high price for his fight against hate: German friends have abandoned him. But Lindh has also received much encouragement, some of which he would not necessarily have expected. There were even solidarity demos outside his party office — which in turn drew further death threats.

"It was impressive how many victims of racism wrote to me saying that they were always there for me, that they would protect me if I needed help," Lindh said. "I thought that was great, yet I'm not a victim of racism at all, but of people who are racists."

Wales' Rabbi Matondo is the latest athlete to be subjected to racial hatred online. His reaction, a direct challenge to Instagram, went viral and put the inaction of social media companies back under the spotlight.