Labor costs in Germany are rising faster than the EU average as workers have secured higher wages on the back of steady economic growth. The competitiveness of German businesses, however, seems not yet threatened. 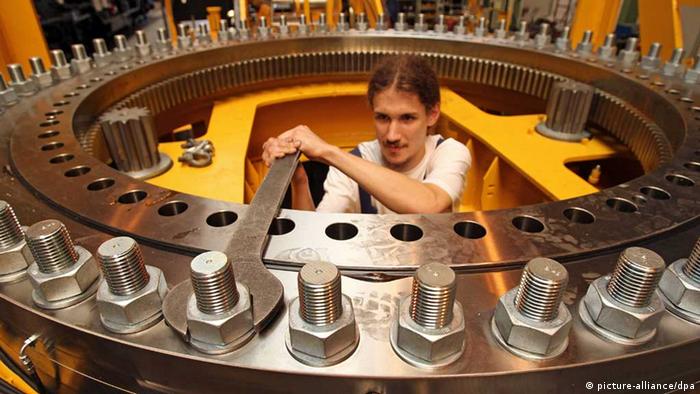 German labor costs surged 3.9 percent in the first three months of 2013, which had been the steepest quarterly rise in more than three years, the German statistics office, Destatis, said Friday.

Compared with the previous quarter, unit labor costs, which identify the costs for an hour of work, increased by 1.1 percent, the office said.

Destatis attributed the rise to 3.5 percent higher wages on average, as well as an increase of 5.3 percent in non-wage labor costs, such as contributions to the German social system paid by employers. In addition, a higher than normal number of German workers had been on sick leave in the quarter, which had weighed on businesses' payroll expenses, Destatis said.

After more than a decade of falling real incomes in Germany, labor unions have been able to secure substantially higher wages in recent years, lowering the competitive advantage of German labor over their counterparts in the European Union.

Survey: Germany among most competitive nations in the world

As a result, the latest available EU figures show a rise by 2.7 percent in German labor costs in 2012, while these costs increased just 1.6 percent on average in the European Union. Thereby, recession-hit countries experienced the steepest declines in labor costs. They fell in Greece, for example, by 11.1 percent, and in Portugal 8.7 percent.

By contrast, unit labor costs surged most significantly in Romania and Estonia with 6.6 percent and 5.8 percent respectively, although coming from very low levels, the EU data showed.

The German Bundesbank said it expected labor costs this year and next year to rise more steeply than in 2012. Unlike most of its eurozone partners, economic growth in Germany would accelerate again in 2013, the central bank said in a report on Friday.

The US economy is the most competitive in the world, according to a survey by Swiss think tank IMD. It regained the top spot from Hong Kong which fell to third place, while Germany made it back into the top 10. (30.05.2013)