Nearly two-thirds of German youths aged 13 and under read books several times a week, according to a new study. Magazines are still very popular among the age group. Only one-third turns to YouTube for entertainment. 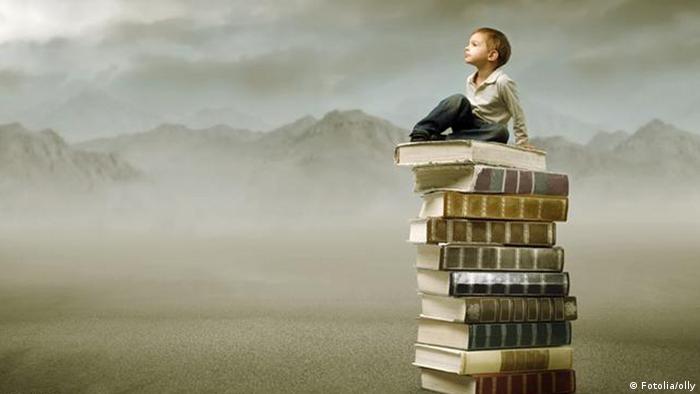 In Germany, the birth place of the printing press, books may have a bright future.

According to a study published Tuesday, 61 percent of six-to-13-year-olds in Germany regularly read books, while just over half of kids (55 percent) in this age group pick up childrens' magazines and comics several times a week.

The study - however - was commissioned by a group of six publishing houses, including Panini, Egmont Ehapa Media and Spiegel. Some 1,700 children were interviewed with their parents.

While 62 percent said they used the internet and apps, only one in three (34 percent) kids aged six to 13 regularly watched videos on YouTube. Even fewer (28 percent) said they played video games.

Only TV beat print media when it came to winning children's attention. Ninety-three percent of four-and-five-year-olds watch television multiple times a week, while 97 percent of 10-to-13-year-olds regularly sit in front of the tube.

Not surprisingly, however, DVDs and blue-rays don't play a big role in German kids' lives, with only 15 percent of six-to-13-year-olds using them regularly.

Just because many enjoy reading, doesn't mean they're not digitally oriented. In the six-to-nine-year-old category, 37 percent of those surveyed had their own cell phone or smartphone, while the number jumped to 84 percent among 10-to-13-year-olds.

Among that older group, the Facebook-owned messaging service WhatsApp has overtaken old-fashioned text messaging (68 compared to 61 percent). Only one in four (29 percent) 10-to-13-year-olds said they used Facebook.

Once upon a time in Syria: New children's book compiles tales from refugees' home countries

Refugee children in Germany told author Thomas Mac Pfeifer their favorite bedtime stories. He then compiled a new multi-lingual book that brings together folklore from Iraq, Syria, Afghanistan and other war zones. (26.10.2016)

He was modeled after a Canadian black bear named Winnipeg in the London Zoo. Author A.A. Milne introduced Winnie-the-Pooh to the world 90 years ago - thrilling readers of all ages, except for his son Christopher Robin. (14.10.2016)