He was modeled after a Canadian black bear named Winnipeg in the London Zoo. Author A.A. Milne introduced Winnie-the-Pooh to the world 90 years ago - thrilling readers of all ages, except for his son Christopher Robin. 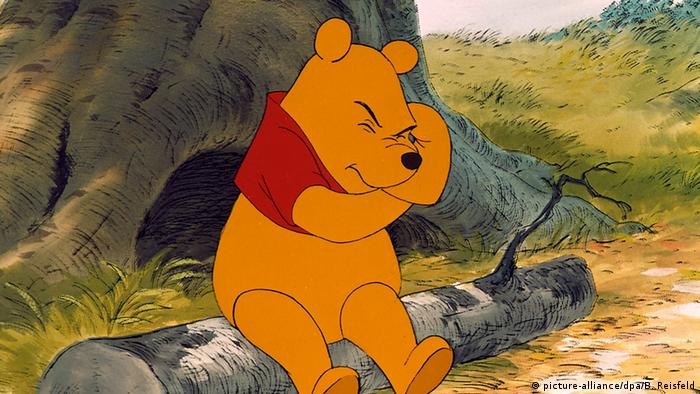 While visiting the London Zoo, Alan Alexander Milne's son Christopher Robin would spend hours watching the bears. That was enough to inspire the writer to compose a children's story about a fictional bear Winnie and his friends - the grumpy donkey Eeyore, the cute little Piglet, a wise old Owl and a Rabbit.

All of these creatures could also be found in Christopher Robin's stuffed animal collection at home. Winnie-the-Pooh himself is somewhat scatterbrained and a bit slow, but certainly a lovable and good-natured fellow. His favorite pastimes are snacking on honey and singing funny songs.

One of Pooh's favorite things to say is, "People say nothing is impossible, but I do nothing every day." Milne himself admitted his creation was not particularly bright.

The first Winnie-the-Pooh book was published on October 14, 1926 and sold more than one million copies in the first year alone. Not only children but also adults were drawn to the entertaining stories that were well seasoned with puns and never raised a judgmental finger - as was typical in children's literature of the day. 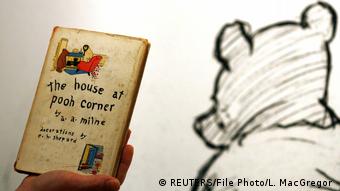 The first US edition of the 1928 sequel, "The House at Pooh Corner"

In Germany, "Winnie-the-Pooh" was released under the title "Pu der Bär" in 1928.

Milne followed up his bestseller with "The House at Pooh Corner" two years later, adding Tigger the rambunctious tiger to the bunch. The main human character Christopher Robin, whose childhood is reflected in the pages of his father's stories, has to say adieu to his animal friends because he has to go to school.

The real Christopher Robin was never able to separate himself from the tales. While it must have been exciting as a child to read about himself, he was later teased and constantly reminded of his stuffed animals. As an adult, he wrote several autobiographies.

In one, Christopher Robin says bluntly that his father stole his name and used it to attain success and left him nothing but the "empty fame of being his son."

In the meantime, Walt Disney also wanted to stick his fingers in the honey pot and share in Pooh's fame. A.A. Milne was flattered - but he didn't live to see his figured animated.

Five years after the author's death in 1965, Disney acquired the film rights from Milne's widow and "Winnie-the-Pooh" came to the big screen. Disney series and full-length films featuring the Pooh Corner characters are still broadcast today.

Is "Inkheart" author Cornelia Funke Germany's J.K. Rowling? The star children's writer is releasing a sequel to her 1997 bestseller "Dragon Rider." "The Griffin's Feather" is a fantasy tale with a green message. (23.09.2016)

Germany's beloved children's books: A unique take on 'happily ever after'

To celebrate International Children's Book Day on April 2, discover these classics of Germany's children's literature. Beware: Some of them do not end as well as Disney's fairy tales. (01.04.2016)

A free spirit, the author and translator of hundreds of major works died at the age of 70. He'll also be remembered for his charismatic performance style. (16.06.2015)