Deniz Yücel, a German journalist who had been in jail in Turkey for a year, has left the country. Berlin welcomed the news, but warned that other reporters, among them Germans, remain in detention. 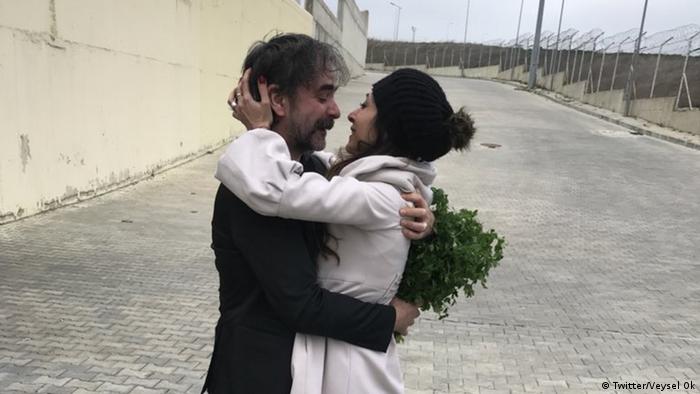 Deniz Yücel's lawyer, Veysel Ok, tweeted a picture of Yücel and his wife, Dilek Mayatürk, hugging in front of Istanbul's Silivri prison. Earlier, Germany's Foreign Ministry had confirmed a report in German daily Die Welt that he was set to walk free.

Deniz Yücel had been detained for a year without any charges brought against him. A German government spokesman said he was "relieved and glad" and thanked the Turkish judiciary. He also said there had not been any "dirty deals" with Ankara.

Read more: A timeline of the year Yücel has spent in Erdogan's prisons in Turkey

In a press conference, German Foreign Minister Sigmar Gabriel thanked the Turkish government, and especially his counterpart Mevlut Cavosoglu, for their cooperation.

Yücel's release is "an example of how diplomacy and vigilance can pay off," said Gabriel, adding that the journalist was "on his way to the airport in Istanbul." Later, the German government confirmed that Yücel had left Turkey.

Gabriel insisted however that Berlin would not forget the "five other Germans who are still in jail, we want to use this momentum to accelerate their path to freedom was well."

Chancellor Angela Merkel said she was "pleased" that Yücel "was able to leave jail today," but like Gabriel, warned that there are many "other cases of people who are not as prominent" being detained in Turkey who should also have the right to a fair and speedy trial.

State-run news agency Anadolu reported that an Istanbul court had accepted charges brought by prosecutors, who are apparently seeking up to 18 years in prison for Yücel.

Yücel, who has both German and Turkish citizenship, is a correspondent for Welt. He has been accused of supporting a terrorist organization.

At a meeting with Chancellor Merkel on Thursday, Turkish Prime Minister Binali Yildirim had hinted that there was some "movement" in Yücel's case and that he hoped Yücel would be released soon.

Yücel's case as well as those of other detained journalists and activists has strained relations between Berlin and Ankara. Merkel called Yücel's case a "burden" on bilateral relations.

He also said that he "hoped they [the government] will lift the state of emergency, which hinders the freedom of the press, and return to normal democratic structures."

Welt Editor-in-Chief Ulf Poschardt said on Twitter that his release was "the best news ever," adding: "We are so happy! Thanks to all supporters." The daily had earlier been informed of the release by Yücel's lawyer.

Last February, Yücel went to a police station for questioning about a report he wrote about the Turkish energy minister. He was arrested there and later accused of sedition and using "terrorist propaganda to incite the population."

There are currently five German and more than 100 Turkish journalists in Turkish prisons.

Left and Green party lawmakers have slammed Germany's Turkey policy ahead of Prime Minister Binali Yildirim's visit to Berlin. They demand a tougher stance in the face of human rights violations. (15.02.2018)