For the first time since 1935, Germany's Jewish community has ordained a female rabbi. Alina Treiger, 31, will have the same rights and responsibilities as her male colleagues. 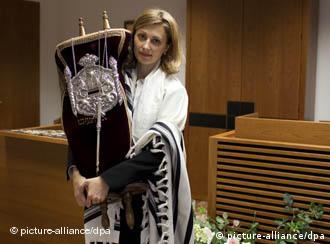 Treiger said she was excited to take on her new role

Alina Treiger is the first woman to be ordained as a rabbi in Germany in 75 years. She and two male rabbis were ordained in an emotional ceremony attended by German President Christian Wulff and Jewish leaders from around the world at Berlin's Pestalozzi synagogue on Thursday.

Jewish life has taken root again in Germany after being nearly wiped out by the Nazis.

"For the past two years, rabbis have been ordained here in Germany, rabbis who completed their studies in Germany," Wulff said.

Ukrainian-born Treiger studied at the Abraham Geiger College in Berlin, which was founded in 1999, and is due to take up her post as rabbi in Jewish religious communities in the towns of Oldenburg and Delmenhorst.

Liberal Judaism considers men and women to be equal, and she was made to feel very welcome, Treiger told Deutsche Welle ahead of the ceremony.

"This shows that the attitude towards female rabbis has changed to the better," she said.

No difference between male and female rabbis 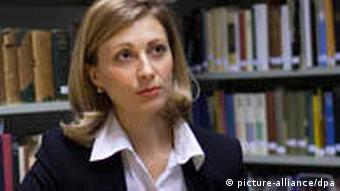 As a rabbi, Treiger will not only read from the Torah and give religious lessons, but also conduct marriages and funerals, and sit on Rabbinical courts.

"I hope that the women in the Jewish community see that it is possible, as a woman, to take an active part in learning and studying our texts and sources," she said.

Before coming to Germany, Treiger worked in Jewish organizations in Ukraine and Russia. In her hometown Poltava, she headed the Jewish community's congregation programs.

"At that time, in the year 2000, the World Union of Progressive Judaism was looking for young people willing to do rabbinic training," she said. "I was asked and said ‘yes.' So, I went to Berlin to study."

Treiger's ordination was the first in Germany since Regina Jonas became the world's first female rabbi in 1935. Jonas, who grew up in Berlin and was trained there, was murdered at the Auschwitz death camp in Nazi-occupied Poland in 1944.

Germany's Jewish community now counts nearly 110,000 members. After the fall of the Berlin Wall, Germany made it easier for Jews from the former Soviet Union to immigrate and obtain citizenship. Currently around 50 of the 110 Jewish community congregations do not have a rabbi.

German chancellor Angela Merkel has been awarded the Leo Baeck medal for her work in German-Jewish reconciliation. She accepted the honor at a ceremony in New York on Tuesday. (22.09.2010)

The opening of a new synagogue in the city of Mainz and the recent ordaining of two rabbis in Leipzig have given a boost to the renaissance of Jewish culture in Germany. (04.09.2010)