A project that gives virtual tours of synagogues destroyed by the Nazis digitally recreates an otherwise lost part of German culture. But it was a contemporary form of anti-Semitism that got the exhibit off the ground. 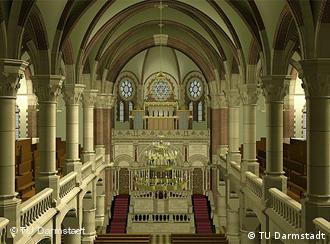 Munich's synagogue was one of 14 that were virtually re-created

The project started after four neo-Nazis firebombed a synagogue in the northern German town of Luebeck on the eve of Passover in 1994, according to Mark Grellert, who has been creating virtual reconstructions of synagogues at Darmstadt Technical University since that firebombing both as a student and now professor in the architecture department.

"I don't remember where I heard this about the arson attack, but I think a couple of minutes afterwards and I got the idea, we have to do something against this," he told Deutsche Welle.

His idea was to virtually reconstruct some of the synagogues that were destroyed on Kristallnacht, or the Night of the Broken Glass, on November 10, 1938. That was one of the most heinous attacks against Jews, synagogues and Jewish businesses in German history.

Their efforts culminated in an exhibition in Bonn in 2000.

That exhibition has now come to the United States for the first time at the Holocaust Memorial Center Zekelman Family Campus in Farmington Hills, Michigan. The exhibit opened on August 29 and will run through the end of November.

Back in 1994, Grellert and his team started with three synagogues in Frankfurt. But he said they quickly realized that the project wouldn't move as quickly as they hoped as it would take them almost one year to finish a single synagogue.

The first step was to find blueprints or old photographs showing the synagogue's floor plan then Grellert and his team would reach out to people who remembered the original appearance of the synagogue.

"In many synagogues, you have only black-and-white photographs," Grellert said. "So we ask them if they have remembrance of the colors of the synagogues." 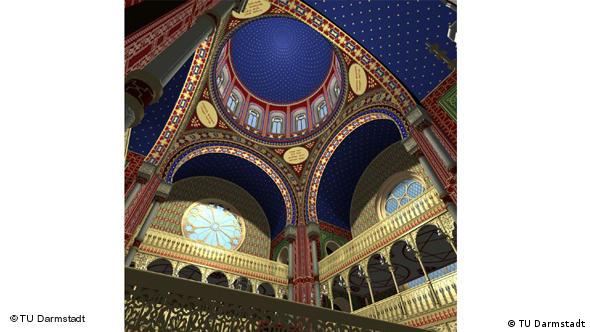 From there, the students redraw the blueprints into computers to create 3D models. When the project started back in 1994, 3D modeling technology was less advanced primitive than today. But in recent years, Grellert added, the team has been able to account for the detail of the synagogues decor, including ornate chandeliers, stained-glass windows, and red brick exterior.

The end result of all the work is 14 virtually reconstructed synagogues from all over Germany presented in an exhibit divided three parts: Perception, Escalation, and Reconstruction.

The exhibit starts by putting a context around Germany's anti-Semitic laws in the 1930s, followed by the names of the 1,200 places in Germany where synagogues were destroyed on Kristallnacht.

The final room, Reconstruction, displays the 14 virtually reconstructed synagogues. The display begins with the synagogue’s exterior then shows the interior with special attention paid to details like the shadows cast by balconies and refracted light rays coming in through the windows.

The intricate digital displays recreate the importance the houses of worship held in Germany before their destruction, according to Stephen Goldman, executive director of the Holocaust Memorial Center in Farmington Hills, in the US state of Michigan - where the exhibit is currently located.

"These were big, prominent institutions," he told Deutsche Welle. "Often looking exactly like the cathedrals across the street and done by prominent and well-known German architects." 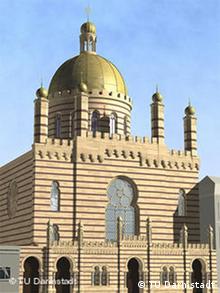 Goldman added that by destroying the synagogues, the Nazis tore apart more than individual buildings.

But Goldman admitted that while the digital reconstructions would not have the significance of an actual house of worship, they could serve as a reminder of what was.

Those voices spoke powerfully to Ruth Schnee, who attended the exhibit's opening in Michigan. Originally from Duesseldorf, she has lived in the United States since 1939 and vividly remembers Kristallnacht.

"I remember the synagogue in Duesseldorf, which was our synagogue, being put on fire, and the rabbi ran into the building to save the Torah, and perished in the building," she said. "The fire brigade was trained to protect the adjoining buildings, and not of course the synagogues. The art, the furniture, everything was demolished."

The Duesseldorf synagogue has not been recreated by Grellert and his team, though they continue to work on the project with his students 10 years after its launch.

Survivors and others commemorated the 65th anniversary of the liberation of the Nazi-run Buchenwald concentration camp on Sunday. The names of thousands of people who died there have now been published online. (11.04.2010)

A new synagogue was opened to the public in a city in western Germany on Sunday. The last synagogue in Herford closed during Adolf Hitler's rule of Germany. (14.03.2010)