German investors confident there will be no Brexit

German investors don't believe in a Brexit after Thursday's referendum in the UK. Stock indexes have rallied in midday trading, while Asian brokers remained extremely cautious as the vote got underway. 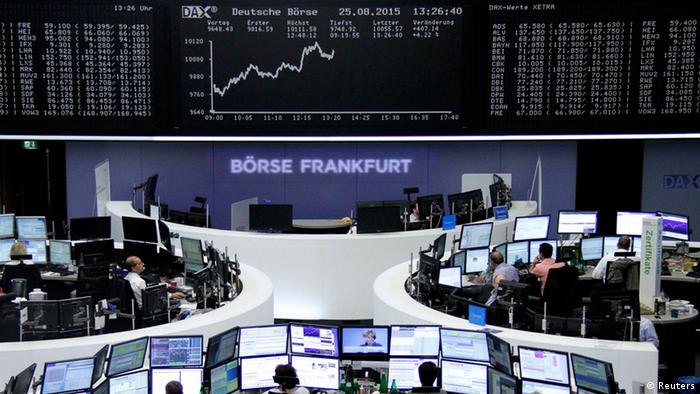 German investors appeared convinced that Britain would not leave the EU after Thursday's referendum. The blue-chip DAX 30 soared by over 2 percent in midday trading, heading for 10,300 points and marking the fifth consecutive day of gains on the Frankfurt Stock Exchange.

The SME-dominated MDax added 1.8 percent, while the technology stocks TecDax increased by 1.3 percent halfway through the trading day.

In contrast, Asian stocks were locked in hesitant and undecided trade on Thursday as investors braced for the outcome of Britain's vote on EU membership.

While two final pre-vote opinion polls showed the "Remain" camp nudging ahead in the closely divided campaign, trading activity in Asia was thin and cautious.

MSCI's broadest index of Asia-Pacific shares outside Japan rose by a marginal 0.2 percent. "It will be hard for the market to move until the UK referendum results are released," Barclays Tokyo analyst Shin Kadota said in a statement.

With many Asian markets flat, China's blue-chip CSI300 index dropped by 0.9 percent by the lunch break, and the Shanghai Composite was down 0.8 percent. But both closed only 0.5 percent in negative territory on Thursday, with trade volumes being extremely thin.

"Markets are still incredibly nervous and some sharp market moves are likely over the next 24 hours," IG Melbourne analyst Angus Nicholson predicted, pointing to volatility indicators being higher.

The British pound - the cleanest way to play the Brexit trade - climbed to a six-month high against the greenback, thus cementing an impressive 6-percent rise last week, but then lost some of its gains later in the day.

The political folly of one man may cast the entire European Union into crisis. There will have to be consequences, says Alexander Kudascheff. (23.06.2016)