Germany's BND intelligence service has denied any involvement in the secret training of Libyan security services by German elite forces even as media reports point to a widening German role in the affair. 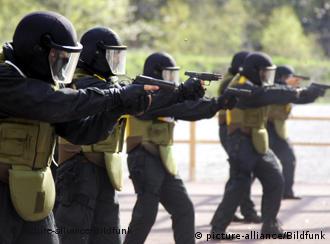 The Federal Intelligence Agency (BND) was informed of the illegal training offered to Libyan police from its inception and "advised" the German officers involved in the training programs allegedly held between 2005 to 2007, according to a report in the daily Berliner Zeitung on Saturday, April 5.

Members of the German embassy in the Libyan capital Tripoli were informed about the operation, newsmagazine Der Spiegel reported.

The BND denied being involved in the training seminars.

"The BND neither provided training assistance nor was it connected as a consultant or adviser," a spokesperson told the German dpa news agency on Saturday.

Despite the denial, several parliamentarians on Saturday called for the parliamentary control committee, which concerns itself with the activities of the secret services, to look into the matter.

"The mention of the name 'Libya' alone should have alarm bells ringing at the BND," Wolfgang Bosbach, leader of the parliamentary group of Christian Democrats and their sister party, the Christian Social, Union, told Bild am Sonntag.

German Defence Minister Franz Josef Jung also condemned the officers' behaviour, saying: "This should under no circumstances be accepted."

A spokeswoman for the Foreign Ministry in Berlin said it was looking into the claims.

Disciplinary proceedings have started against eight police officers from the state of North Rhine-Westphalia and one member of the German Army. As many as 30 Germans are reported to have been paid by Libya for their roles in training foreign security authorities. 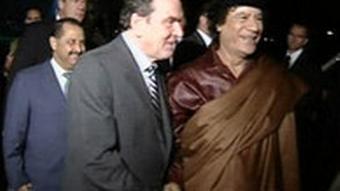 One paper said Schroeder and Gaddafi organized the training agreement

Once shunned by the international community for supporting terrorists, Libya has taken a more pro-Western course in recent years. However, it still comes under fire from rights groups over its human rights record.

The Germans accused of illegally training Libyans received as much as 15,000 euros ($23,610) for preparing or conducting the seminars held in their spare time. The Germans told their superiors they were on vacation in Tunisia, according to a report in Saturday's Sueddeutsche Zeitung.

The report added that the BND insisted on keeping its role in the program behind the scenes. The organization came under heavy criticism in 1995 when the BND's involvement in training Libyan police and military forces in the late-1970s came to light.

Germans trained around 120 policemen at a barracks in Tripoli, Spiegel said, adding that the Libyans were taught police driving methods and how to storm buildings and board ships.

The instructors held several meetings with German embassy officials to brief them on the program, the magazine added.

Accusations of Germans providing instruction to Libyans should be addressed by the German parliament's intelligence oversight committee, said Max Stadler of the opposition's free-market liberal FDP and committee member.

"We definitely have to deal with the issue," he said, the Welt am Sonntag newspaper reported ahead of publication. "There are a lot serious questions."

More than a few chin-ups?

In order to keep German security authorities from participating in such illegal activities in the future, the government wants to raise the amount paid to authorities working under difficult circumstances, German newsweekly Focus reported Saturday.

The move would increase the bonus paid to special forces members from 225 euros to 400 euros.

Accusations that seven of the eight men had violated official secrets laws, however, have proved unfounded, according to the Frankfurter Rundschau. An inquiry continues into exactly what the eighth German told his students, prosecutor Mathias Proyer said.

"We are investigating whether he had them doing a few chin-ups or if he taught them things he could have only learned during his training Proyer told the paper.

German Police Officers Accused of Taking Side Jobs in Libya

Several German police officers and a soldier have allegedly trained Libyan anti-terrorism units for hefty sums. Their failure to get permission for the side job is the least of their concerns at the moment. (04.04.2008)

A subsidiary of the European aerospace group EADS confirmed that it had received two orders worth almost 300 million euros ($411 million) for Milan-type anti-tank missiles and communication systems from Libya. (03.08.2007)

Do you think German police officers moonlighting in Libya could actually improve the human rights situation there? Please include your name and country in your reply.

The head of Denmark’s defense intelligence service, Lars Findsen, has been placed in custody over the leak of highly classified information.

The political scientist was recruited by Chinese intelligence whilst on a lecture trip to Shanghai in 2010, authorities say.

The head of Germany's foreign intelligence agency has warned that the Islamic State is just as strong as it ever was — even without its caliphate. Terrorism experts agree that it has morphed into a powerful network.