German industry saw fewer orders coming in last month, especially from customers in the eurozone. The slight drop is, however, no reason to worry, pointing instead to a boom over the summer slowly playing out now. 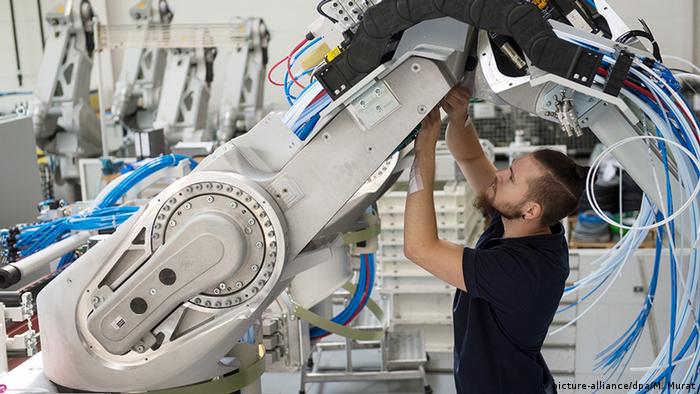 In September, German companies saw their order books shrink by 0.6 percent compared with August, the German statistics offices Destatis reported Monday, as both domestic orders and those from abroad had been fewer.

Demand for industrial goods in Germany fell by 1.1 percent, while foreign customers ordered 0.3 percent less than in the previous month. An uptick in orders from outside the EU of 2.5 percent wasn't able to offset a drop in demand from the eurozone by 4.5 percent, the data showed.

Looking across the whole third quarter, however, new orders again perked up slightly with 0.5 percent growth compared with the April to June period.

The German Economics Ministry pointed to a number of other business indicators, including a rising inflation rate and climbing business confidence, saying they would suggest further growth for Germany as a whole and industry in particular.

"Brightening in relevant indicators points to some degree of pick-up in the industrial sector as the year goes on," the ministry said in a statement.

But analysts are less upbeat. Carsten Brzeski from ING Diba bank told the news agency AFP that initial relief after the Brexit vote in Britain was now giving room for a more realistic view of developments in the sector. "It is hard to see how the German industry can shift to higher gear" without stronger growth in orders," Brzeski said.

Andreas Scheuerle, analyst with DEKA bank, also said that fewer new orders coupled with falling industrial revenues would point to weaker factory output in September. This would, however, not signal a downturn for German industry, but rather a balancing of business following strong ups and downs over the summer, he told the news agency Reuters.

In broken down figures, capital goods orders slumped most significantly in September - down by 1.6 percent - while orders for producer goods and consumer goods edged up 0.5 percent.

Thanks to a stable job market and solid consumption, the upswing in Europe's biggest economy is set to continue over the next two years, says a joint economic forecast by leading economic think tanks In Europe. (29.09.2016)

Germany's exports have posted their biggest rise in more than six years, rebounding strongly in August from declines earlier this year and dispelling fears for a slowdown in Europe's biggest economy. (10.10.2016)