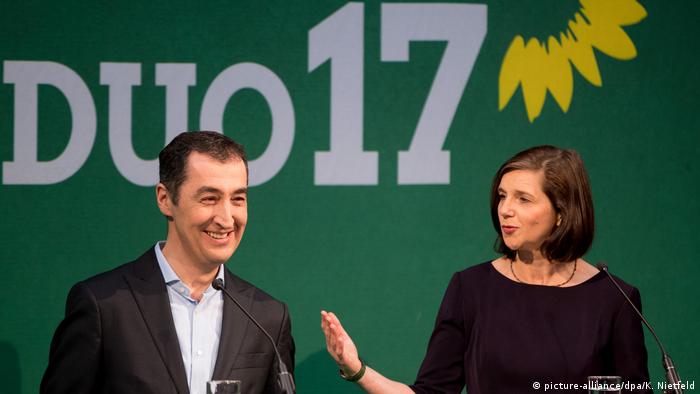 Germany's national political parties are gearing up for a general election later this year. It looks to be the toughest in decades, says DW's Volker Wagener. (13.01.2017)

Though she already had the position sealed because of the Green party's one-man-one-woman rule in its leadership positions, Göring Eckardt confirmed her place with 70.63 percent of the membership vote.

But the battle among the men for the other role was much tighter. Co-chair Cem Özdemir fought off parliamentary leader Anton Hofreiter and Robert Habeck, environment minister and deputy state premier of Schleswig-Holstein, by an extremely slim margin: Özdemir took 35.96 percent of the vote, to Habeck's 35.74 percent - a gap of only 75 votes. Hofreiter came third with 26.19 percent.

"This is the right duo for this time," said Michael Kellner, the Greens' general manager, as the results were announced. "They were both formed by the severe breaks of our time," he added - in other words, Göring-Eckardt was born in East Germany, while Özdemir grew up as the son of an immigrant family.

"This is a major token of trust," Göring-Eckardt said at a joint press conference on Wednesday afternoon as she welcomed the vote. "We will give everything for this campaign, because we know that an awful lot is at stake."

The Green leader also mentioned Donald Trump's impending presidency in the US: "This is a huge change in our times, and it means we will fight all the harder against climate change. We will try to tear down walls, not build new ones," she said. The Greens are currently polling at around eight percent nationally

"This is something that means a lot to me," said Özdemir, standing alongside her. "It wasn't something that I was born with that I would one day lead a German party and even be its main candidate."

"It seems that what we grew up taking for granted - a western alliance - is even being questioned by the next resident of the White House," said Özdemir, adding that this made it all the more important to strengthen Europe.

The Greens' regulations mean that two candidates always lead the party into the German parliamentary elections, at least one of whom must be female, though the party's choices this year also represent a slight break from another tradition - picking one "Realpolitik" moderate politician and one "idealist" from the party's leftist roots.

This time, the party has chosen two from the so-called realist wing, and Hofreiter's third place was read by political pundits as a defeat for the party's leftist wing. But Göring-Eckardt dismissed the labels. "Our members showed that they don't think in wings," she said at the press conference, "and that's good." Predictably, she and Özdemir batted away any questions speculating about potential coalition preferences. "That can't be done in these times," she said.

While it will stand as an independent party in September's election, Wednesday's vote means the party could pursue a coalition with Chancellor Angela Merkel's conservative Christian Democratic Union (CDU) after the election - in which case Özdemir would make a plausible choice for the role of foreign minister (foreign policy is one of his favorite themes) - following in the footsteps of Joschka Fischer, who served as foreign minister under Social Democrat Chancellor Gerhard Schröder, the last time the Greens were in power.

Nevertheless, as one reporter noted in his question, it was perhaps significant that Winfried Kretschmann was mentioned early in Göring-Eckardt's introductory speech. The state premier of the prosperous southern state of Baden-Württemberg is currently governing with the CDU. Though Göring-Eckardt wouldn't accept that this indicated a preference for a conservative coalition, the Green leader acknowledged Kretschmann's successful capacity to "win people over and trust him and the Greens," and promised that he would play an important role in the election campaign. 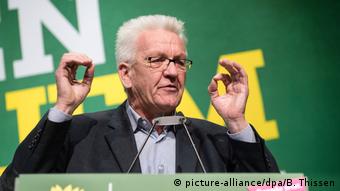 Kretschmann, currently governing Baden-Württemberg with the CDU, remains a popular figure and one of the Greens' biggest assets

For his part, Özdemir said that both he and Kretschmann had hoped the Greens could govern with the SPD in Baden-Württemberg, but that it had been "part of our democratic responsibility" to seek another coalition partner when the SPD failed to win enough votes.

The socialist Left party, currently the biggest opposition party in the German Bundstag, responded to the Greens' vote by warning against seeking closer ties with the CDU. "Don't forget," the party posted on its Facebook page, "social and ecological political change can only happen without the CDU/CSU. Remember: those who bind themselves to Merkel will get [CSU leader Horst] Seehofer too - and so an upper limit for refugees."

Göring-Eckardt is not a stereotypical Green party figure - an East German practicing Christian - who has led the Greens' parliamentary faction since 2013 (after a previous stint between 2002 and 2005), and is considered a mediator between the party's various factions.

Ahead of the last German parliamentary elections in 2013, the Greens set their stall out for a coalition with the Social Democrats. That course, however, led the party to a disappointing 8.4 percent of the vote - comfortably over the five percent hurdle required for a place in the German parliament, although not enough to form part of government. The Greens have dropped below ten percent in the most recent opinion polls - in part because of criticism of police action in Cologne on New Year's Eve.