German Fraternities Fight Right-Wing Image | News and current affairs from Germany and around the world | DW | 04.06.2006

Student Fraternities may offer "an escape from the anonymity of university life", but can they shed their burdensome reputation of being too nationalistic? The members of the Nibelungen fraternity in Cologne think so. 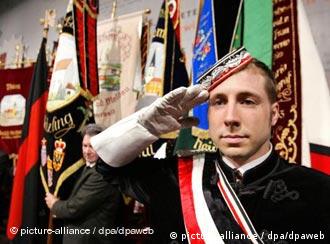 A spacious room in a beautifully restored 19th century house, with an internet connection in your room, the university at your doorstep and a monthly rent that is half the going rate -- for most students, it should seem like a dream come true. But in reality, most do turn it down because the price tag on these luxurious living quarters also includes membership in a fraternity, or "Studentenverbindung."

"Freedom, honor and the Fatherland" may sound a bit old-fashioned, but in fact there are over 2,000 student fraternities in Germany that strive to uphold similar mottos. German fraternities have the reputation of being ultra-conservative, not only because they have been around for more than 200 years, foster traditional values and are almost exclusively all-male, but also because they tend to promote German nationalist sentiment.

Since World War II, nationalism has been a four-letter word in Germany. The German flag has suffered an unspoken ban -- though the upcoming soccer World Cup has brought about an unprecedented rebirth of black, red and gold. What in other countries may be considered healthy patriotism is quick to be condemned in Germany as right-wing extremism.

Hans-Joachim Franke, a former resident of "Nibelungen," a Catholic fraternity in Cologne, said the fraternities' nationalist character had historic roots.

"Patriotically minded students, who supported the unification of what were then individual German states, came together and created fraternal organizations," he said. "Many of them were even prosecuted for advocating democracy in Germany."

In fact, the German fraternities have been identified as being so liberal in the European sense -- that is, conservative -- that the left-wing Social Democratic Party recently decided that membership in a fraternity is not compatible with membership in their party. 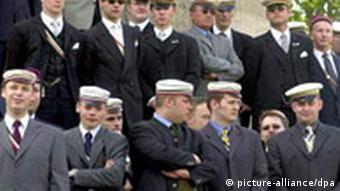 The vast majority of Germany's 2,000 fraternities are all-male

The fraternities' old school reputation has become an albatross around their necks and led to drastic decreases in membership. Fifty years ago, some 30 percent of all German students belonged to such organizations; today fraternity members represent between 2 and 3 percent of the total student population. The traditional practice of intentionally wounding each other in the face with swords while fencing may also have contributed to students' loss of interest.

Yet those who do join are not all right-wing extremists, as the stereotype may suggest. Rudi, a 22-year-old student of English and sports, admitted that he had simply "landed in the fraternity by accident" after finding a room there on the Internet.

Bernd, another Nibelungen resident, painted a rather cosmopolitan picture of the organization (cocktails aside).

"Just because we're in a fraternity doesn't mean we're different from everybody else," he said. "We have parties here like everyone else too. And they're really fun because lots of people come together, different nationalities are there, which makes for a good international mix and that can only mean fun."

The Nibelugen house, located near the university in Cologne, is international indeed: only two of its six residents are German.

German national fervor surfaces during World Cup soccer matches, but many Germans still feel uncomfortable about waving the tricolor flag outside of sports events. (May 30, 2006)

With the country turning away from the Red-Green government and poised for a new political departure, DW-World spoke to Green party politician Hans-Christian Ströbele about the legacy of the late '60s. (Oct. 14, 2005)