The European Union should provide a "clear political answer" to repression under President Alexander Lukashenko in Belarus, German Foreign Minister Guido Westerwelle has told a newspaper. 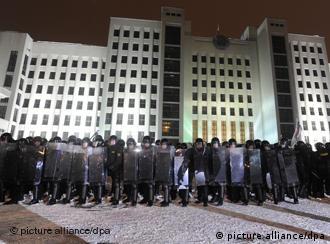 German Foreign Minister Guido Westerwelle said the European Union had to confront the political leadership of Belarus over reported electoral corruption and repression in the country.

"We will insist that there is a clear political response from the EU to the interference with the election in Minsk," Westerwelle told the Sunday edition of the Frankfurter Allgemeine newspaper.

"An unequivocal answer to the political officials and the president is necessary, saying that the repression of freedom is not acceptable," he said.

Germany has been a staunch critic of the leadership in Minsk as Belarus continues to detain hundreds of opposition supporters that arrested during a mass protest over the disputed December 19 presidential elections, in which incumbent Alexander Lukashenko was declared the winner. 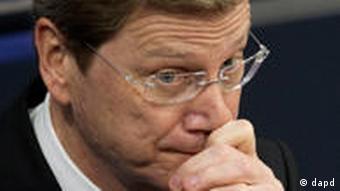 Westerwelle called for an 'unequivocal answer' from the EU

Westerwelle also lashed out at a decision by Belarus on Friday to close the Minsk office of the Organization for Security and Co-operation in Europe (OSCE).

By making the move, an apparent response to the group's criticism of the election, Westerwelle said that the government of Belarus had "further marginalized itself."

Chancellor Angela Merkel's office also voiced concern over recent events, and called for the release of those detained on political grounds.

"Germany is on the side of all those who want freedom and democracy in Belarus," Chancellor Angela Merkel's spokesman Steffen Seibert told the same newspaper.

Seibert said that the force used by Lukashenko's government had made a mockery of the rule of law. "Our requirement is clear: He must free the political prisoners," Seibert said.

Head of the European Parliament Jerzy Buzek on Thursday called for an end to the crackdown on the opposition in Belarus and the release of those detained, including opposition candidates.

Lukashenko, who has ruled his country for the last 16 years, won a fourth term as president in the December elections with nearly 80 percent of the vote. Critics, however, claim the elections were not democratic.

The world's largest regional security organization must close its doors in Minsk, after the Belarusian government refused to extend its mandate. The OSCE had criticized the election of President Alexander Lukashenko. (01.01.2011)

More than 580 opponents of Belarus' reelected president, Alexander Lukashenko, have been sent to jail. They were detained after taking part in mass protests in Minsk following Sunday's vote. (21.12.2010)

Many outside of Belarus have criticised Minsk for the use of violence against protesters following Sunday's presidential election. President Alexander Lukashenko, though, praised the work of his security forces. (20.12.2010)