Supermarket chain Aldi is set to open its first store in China. The German discounter is reportedly hoping to tap into a more affluent customer base by touting sought-after products from Europe. 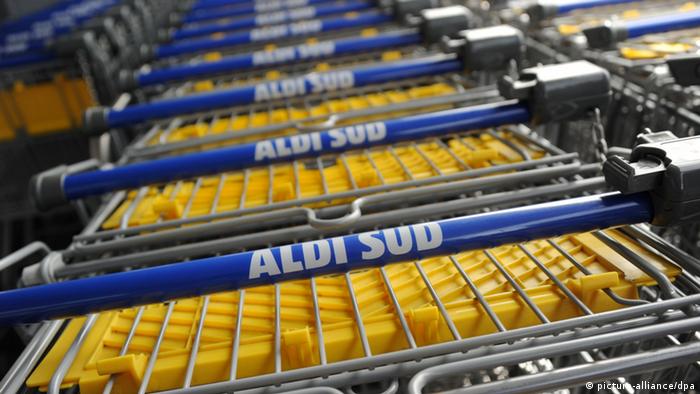 German discount chain Aldi Süd is preparing to launch a flagship store in the coastal metropolis of Shanghai next week, according to trade reports.

A second store is expected to follow in the near future, the Lebensmittel Zeitung newspaper reported.

"This is another step in the race between Aldi and Lidl worldwide," trade expert Matthias Queck from LZ Retailytics told German news agency dpa.

With its stores in Australia and the United States, Aldi Süd is already well ahead in the race to increase business beyond Europe, he added.

Read more: Can Russian discounter Mere beat Aldi and Lidl at their own game?

The retailer began operating an online shop in China in 2017, and speculation about an expansion had been circulating for some time.

Business publication Manager Magazin reported that Aldi initially plans to open at least 10 stores in China, with 50 to 100 further outlets to follow in the coming years.

It said the Shanghai store would offer the usual Aldi products, imported from Europe, as well as a large fresh fish counter.

The supermarket chain was founded in 1946 by German brothers Karl and Theo Albrecht. In 1960, the company split into Aldi Nord, headquartered in Essen, and Aldi Süd, based in Mülheim. The two branches have more than 10,000 stores in 20 countries.

The grocery chain has said that sausages being sold at stores near Hanover may contain the bacteria listeria. Aldi has also recently come under fire for its business practices regarding produce from South America. (26.02.2019)