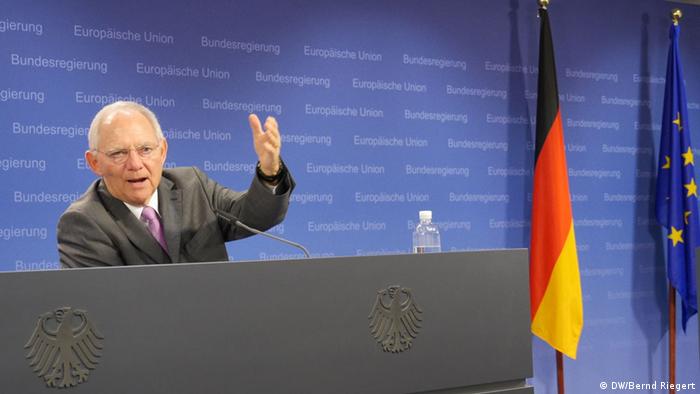 For Greece's new finance minister, Yanis Varoufakis, the international creditors' bailout program amounts to "financial waterboarding" - in other words: torture. Varoufakis didn't attend the EU finance ministers' meeting in Brussels on Tuesday. His new colleagues reacted with studied equanimity to the assumption of power by the coalition of radical leftists and right-wing populists.

Jeroen Dijsselbloem of the Netherlands is president of the Eurogroup, the 19 states with the euro as their common currency. Dijsselbloem has announced that he will travel to Athens on Friday to meet Varoufakis. "We should get to know each other," he said. At present the finance ministers see no need to make any concrete decisions. First they want to find out how Syriza and the Independent Greeks envision ongoing cooperation in the financing of their country. "They want to stay in the euro. We can build on that," Dijsselbloem said. "We're relaxed."

"If they don't want any more aid, we won't force any upon them," German Finance Minister Wolfgang Schäuble said after the meeting. Dijsselbloem doesn't have an official mandate from the Eurogroup for his reconnaissance trip to Athens - "but we have freedom of movement in Europe," Schäuble joked.

The current aid program for Greece expires on February 29. If it concludes with a final report by the troika of financial controllers - the EU, the European Central Bank and the International Monetary Fund (IMF), all of which are hated in Greece - it is possible that there might be a further precautionary credit for fiscal emergencies. The last credit installment from the current program still hasn't been repaid. Wolfgang Schäuble said in Brussels that nothing had changed that situation, including the elections in Greece, which he completely respected.

The heated discussions in Germany and at the EU headquarters in Brussels about debt cuts and more billions for Greece are clearly getting on Schäuble's nerves. "I always feel I have to apologize in Greece for having provided Greece with an extraordinarily large amount of aid. I'll say it explicitly: The German taxpayer has already contributed quite considerably toward the debt cut," he said. Three years ago private lenders waived about 100 billion euros in outstanding Greek debt. Among them were banks belonging to the federal government, and thus also to the German taxpayer.

The interest Greece has to pay on almost 240 billion euros in loans has, to a large extent, already been deferred, Schäuble said. The loans are, on average, repayable over 30 years. Schäuble and other finance ministers pointed out that Greece's income last year was higher than its spending, and the Greek economy was slowly starting to grow. A prognosis by the IMF sees Greece's total debt falling from its current level of 170 percent of GDP to about 112 percent by the year 2020 if Greece sticks with the course it's been on so far.

Schäuble concluded that, in that case, the debt would reduce itself, meaning that cutting or writing off Greece's debt, as demanded by the new Greek prime minister, Alexis Tsipras, of Syriza, in his election campaign, was not in fact necessary. "Anyone who discusses the question of debt cuts only actually reveals that he doesn't know what he's talking about," Schäuble continued. "The program is well underway. Greece is on the right path."

The German finance minister sees terms such as "austerity dictate" and financial "occupation," which are often heard in the discussion about Greece and its international creditors, as misguided. "God knows, the causes are not to be found either in Brussels or anywhere outside of Greece," he said. "They lie in the past. The people who have the responsibility now can't do anything about that." The view frequently expressed in Brussels, particularly by conservative financial politicians and European members of parliament, is that Greece administered its economy badly in the past and is still paying the price for that now. "The Greek people are suffering," Schäuble admitted.

In his press conference, he was very relaxed about any demands that the Greek government might make on the EU or on Germany. "Unlike in 2010, the financial markets trust the sustainability of the eurozone - and rightly so," he said. "We're not in danger of becoming infected, so no one should think it's that easy to put pressure on us." This comment was clearly a response to Alexis Tsipras' threat that his government would "tear up the contracts with the Troika" and negotiate new terms.

The EU finance ministers also addressed the 315 billion-euro ($356 billion) investment program that the president of the European Commission, Jean-Claude Juncker, wants to instigate in order to stimulate growth in Europe. All the finance ministers basically approve of the initiative, but no one actually wants to pay into the fund. The Austrian finance minister, Hans Jörg Schelling, summarized the situation: "First we have to wait and see how exactly that's going to work, and who will decide on the projects," he said. The EU commissioner for growth and jobs, Jyrki Katainen, enticed them with assurances that the fund would provide 1.3 million new jobs. A completely independent committee of experts would decide which projects to sponsor. Some finance ministers weren't happy with that, though: If they're supposed to pay into the fund, they'd also like to have a say.

At the Brussels meeting, Schäuble rejected making direct payments into the fund. He said he was prepared to give the German state bank KfW an additional eight billion euros with which to work indirectly with the Juncker Fund.

Fiscal policymakers in the European Parliament are also critical of the investment program. EU Commission president Juncker wants to excise startup capital of around 16 billion euros for his fund from the joint EU budget. Part of this money would be siphoned away from science funding or emergency pots for tackling disasters. "We'll be eating up margins we're going to need later on," was the criticism made by German conservative Reimer Böge in the parliamentary budget committee. The EU Commission plans that the investment fund should start financing its first projects in the summer of 2015.

Newly elected Greek Prime Minister Tsipras has quickly moved to implement his campaign promises to the Greek people. For European leaders, that is cause for serious concern.