Farmers have rallied in the western German city of Bonn to protest what they see as excessive regulation. The German government recently agreed on a set of new measures governing agriculture. 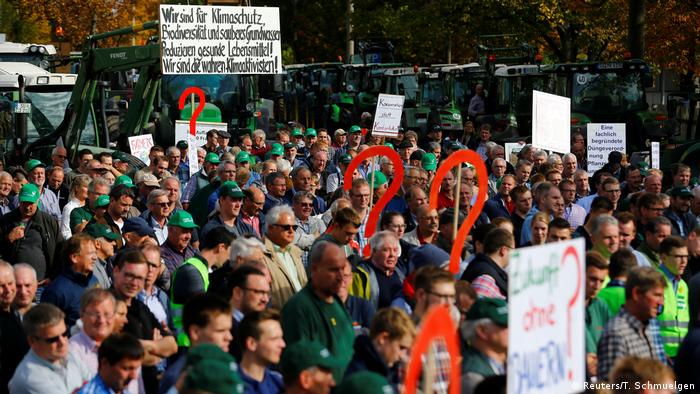 Several hundred farmers, many arriving on tractors, gathered in front of the German Agriculture Ministry offices in the western city of Bonn on Monday, protesting planned government measures they see as a danger to their livelihoods.

"There has to be an end to the exorbitant flood of regulations," the president of the Rhine region's RLV agriculture association, Bernhard Conzen, said in comments carried by news agency dpa.

Conzen said sustainable agriculture had to be based on "a mutual understanding of what was necessary and doable" and that "anything else threatens the existence of family-run farms."

The protest came in response to a package of measures agreed by the German Cabinet at the start of September. Among other things, they stipulate that the weedkiller glyphosate will be banned in Germany by the end of 2023 after a phasing-out period.

The government is also proposing to reduce the nitrate content in ground water by cutting the use of certain fertilizers and liquid manure. Germany has come under pressure from the European Union for regularly exceeding the allowable levels of nitrates in groundwater, mainly due to mass livestock farming.

Many German farmers have complained that the regulations on the use of manure are not based on expert knowledge. They also say that they are still coping with large amounts of excess nitrate from the past.

Farmers in the neighboring Netherlands also turned out on tractors on Monday in eight provinces to protest against measures proposed there to reduce the quantity of nitrates in the environment. A nationwide protest is planned for Wednesday in The Hague, similar to the one on October 1.

The German government has agreed to ban the use of the controversial weedkiller glyphosate. Austria has already banned the chemical, which has been linked with cancer. (04.09.2019)