A conspiracy theorist who rejects the authority of the German state has gone on trial for murder in Nuremberg. The 49-year-old shot dead a police officer attempting to seize weapons he had illegally hoarded. 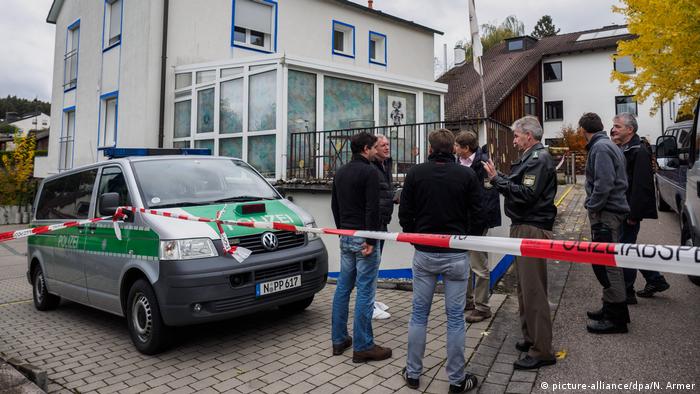 The murder trial of Wolfgang P., who allegedly belonged to a loose right-wing movement known as the "Reichsbürger," began on Tuesday in the Bavarian city of Nuremberg. The defendant shot dead a police officer during a 6 a.m. raid on his house by a special forces unit last October.

Before the trial began, defense attorney Susanne Koller denied both that her client had any intent to murder and that he was a Reichsbürger. "He would not describe himself as that," she said, before adding that the defendant had been shaken by the officer's death.

The defendant himself refused to confirm his identity as the trial began, saying only that he was "the free Mr Wolfgang," according to the DPA news agency - the court then used an expired state ID (whose validity the suspect rejects) to establish his identity. As well as one count of murder, the 49-year-old is also charged with three counts of attempted murder and two of serious bodily harm. 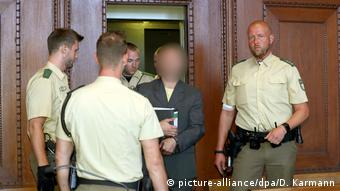 The defendant described himself as the 'free Mr Wolfgang' in court

Wolfgang P. killed one officer on October 19 last year as a special forces unit surrounded his home in the small town of Georgensgmünd in an attempt to seize an arsenal of more than 30 firearms he had illegally hoarded.

According to the police investigation, the suspect shot 11 rounds through the locked door of his apartment, hitting one officer in the lung and another in the forearm. The former died later in hospital. Another policeman was seriously injured by shards of glass flying from the door. A lawyer representing the family of the murdered police officer, whose mother was seen in tears in court, said the defendant's behavior on the first day of the trial was "difficult to bear." "He presented himself, he paraded himself," she told AFP.

One of the central questions that the trial - set to last 12 days - will address is whether or not Wolfgang P. knew that a police raid was imminent and had prepared for it.

Koller said on Tuesday that the defendant had had no idea that police were at his door, and that the shots had been fired after he had been awakened by the "amateurish" raid on his house, which had come from three sides. "With the best will in the world, we do not recognize the grounds for a murder charge," she said.

That account was developed by the testimony of the expert witness, the psychiatrist Michael Wörthmüller who interviewed the defendant after his arrest. "He thought the Third World War was breaking out," Wörthmüller told the court, according to DPA. Having heard loud screams from his room-mate, Wolfgang P. reached for a gun he kept under his pillow, loaded it, and shot through the door. He could not explain why he had panicked, the psychiatrist said.

But state prosecutors are arguing that Wolfgang P. had been wearing a bulletproof vest, and that he had deliberately waited until as many police officers as possible were close to his door before opening fire.

According to the state prosecutor's investigation, Wolfgang P. had initially owned a gun license - as an amateur hunter - but had refused an inspection, prompting local authorities to revoke his license and demand he give up his weapons. 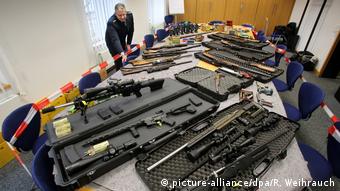 More alarming was the suspicion, aired by state prosecutors after the shooting, that Wolfgang P. may have been warned about the investigation by a sympathetic police officer, with whom the defendant had been in contact via a private chat group.

Prosecutors initially charged the officer in question with negligent homicide, for failing to inform his colleagues about the defendant's involvement in the Reichsbürger scene, but the court refused to allow the officer to be put on trial, on the grounds that he did not know that a raid was being planned. An appeal against that decision is still being considered.

Last October's killing led to increased media attention on the Reichsbürger scene and a crackdown from police. The German domestic intelligence agency, tasked with tracking extremist groups, also increased its interest in the very loose, disparate movement, and recently came up with the startling estimate that there were some 12,600 Reichsbürger in the country, and some were in the police force.

The group is considered far-right, nationalist, and often anti-Semitic, but it's main characteristic is belief in the conspiracy theory that the Federal Republic of Germany does not legally exist, since Germany never signed a peace treaty with the Allies at the end of World War II. In effect, therefore, they believe Germany is currently an occupied country and that its legal borders are still those of the German Reich - either of 1871 or 1937. Reichsbürger do not respect the authority of the German government or its constitution, or Basic Law, and so often refuse to pay tax. The Reichsbürger's theories are persistent, though they have been conclusively debunked.

Whether he describes himself as a Reichsbürger or not, it seems clear that Wolfgang P. fits the definition. His Facebook page, which has not been deleted, includes a number of articles and memes questioning the German state's legitimacy and railing against the country's relatively strict gun laws.

On September 2, 2016, for instance, he shared a meme that read "whoever goes to vote in Germany, is electing their anti-German US occupiers!" He also shared anti-Semitic messages, such as a video about the "Rothschild conspiracy," on July 19.