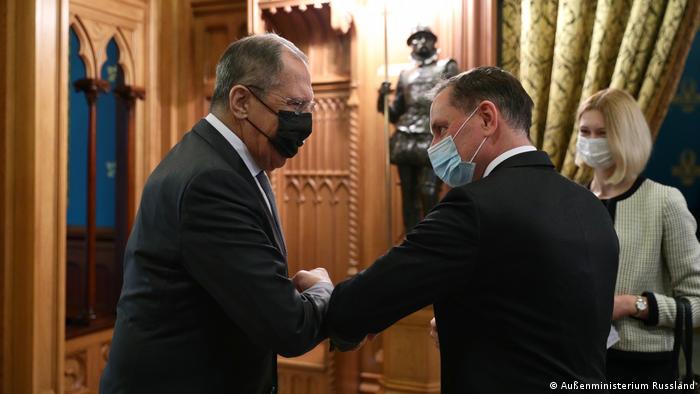 The visit, which has roused controversy in Germany, comes as relations between the two countries remain particularly strained over the suspected poisoning of Russian opposition politican Alexei Navalny, in which Berlin believes the Russian state was involved.

During its visit, touted beforehand as "very important" by Russia, the delegation of AfD parliamentarians voiced harsh criticism of the political atmosphere in Germany.

The deputy leader of the parliamentary party, Tino Chrupalla, told Lavrov that the AfD, despite being the largest opposition party, faced "being discredited and sometimes defamed."

Critics of the AfD have asserted that its anti-immigration policy is based on racism, and the party has been accused of links to neo-Nazi groups. The AfD has also come under frequent criticism for what is seen by many as disrespectful and aggressive behavior in parliament.

Chrupalla also criticized EU sanctions on Russia over the Navalny affair, saying his party was worried about the state of German-Russian relations.

That concern was echoed by Lavrov, who said that "numerous problems have piled up between Berlin and Moscow and they are becoming more numerous."

Lavrov also expressed surprise over the controversy surrounding the AfD visit in view of the fact that Russian opposition figures received a high-ranking welcome in Germany. He said Russia was "in contact with all important political forces in Germany, especially the AfD, which is the largest opposition power in the parliament."

He praised the party for the contribution it was making to bilateral ties, saying that they needed "reviewing and perhaps ... a relaunch."

Chrupalla, who was accompanied by the party's spokesman on foreign affairs, Armin-Paul Hampel, also called for the completion of the Russian-German Nord Stream 2 gas pipeline project.

The project has been vigorously opposed not only by Washington but also a number of central and eastern European countries who feel that it will impact their revenue through transit fees and strengthen Russian influence in Europe.