The head of the German football association has called for dialogue with fan groups, to resolve growing differences over a number of issues. Reinhard Grindel wants to end collective punishments for fan violence. 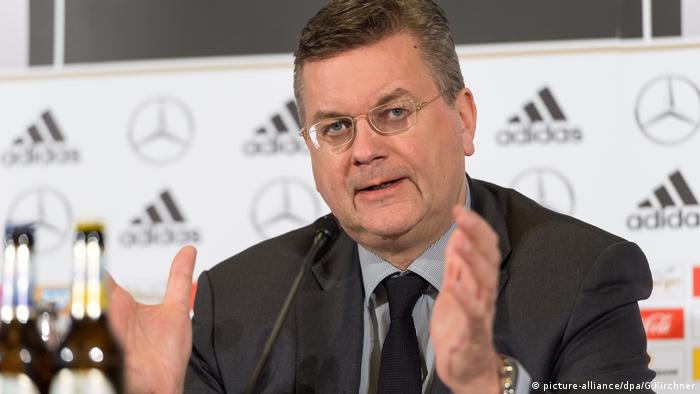 In a statement issued by the German football association (DFB) on Wednesday, its president, Reinhard Grindel, struck a conciliatory tone with the fans, saying that supporters as a whole should not be punished for the behavior of a few.

The DFB president also praised the fan groups who help create the sort of atmosphere in German football stadiums that is the "envy of the entire world."

"The DFB acknowledges this explicitly, and we are grateful for this," Grindel said.

At the same time he invited representatives from hardcore "ultra" fan groups, who often cause trouble, to meet with the FA to discuss about how to end the strife that has seen some of them declare "war" on the DFB over a number of issues, including collective punishments. However, he also noted that his offer of dialogue was not without preconditions.

"There must be a renouncement of violence. We need to build trust, resolve misunderstandings and jointly define clear lines and boundaries," Grindel said.

"We will refrain, until further notice, from imposing penalties which have a direct effect on fans whose participation in violations of the stadium regulations has not been demonstrated," the statement quoted Grindel as saying.

In the past, the DFB has sometimes responded to incidents of violence by ordering clubs to leave whole sections of their stadiums empty for matches, or to play games behind closed doors.

The DFL, which operates the Bundesliga, said in a separate statement that it supported Grindel's initiative. DFL President Reinhard Rauball and Managing Director Christian Seifert said their organization would be "actively involved" in efforts to resolve differences with fan groups.

In the most recent incidents of fan trouble, flares were set off during third division Hansa Rostock's German Cup defeat at home to Bundesliga side Hertha Berlin on Monday while Hannover fans forced the abandonment of a preseason friendly at English Premier League team Burnley earlier this month.

The DFB has launched an investigation into both Rostock and Hertha fans over Monday's violence.

The 45-year-old takes over the men's German Football League (DFL) after a successful stint by Christian Seifert. Fixing ties with the German FA and dealing with the pandemic are on her to-do list.