Farmers should be allowed to shoot wolves that cause "serious agricultural damage," Germany's Environment Minister Svenja Schulze said in an interview. She aims to change the laws that are protecting the predators. 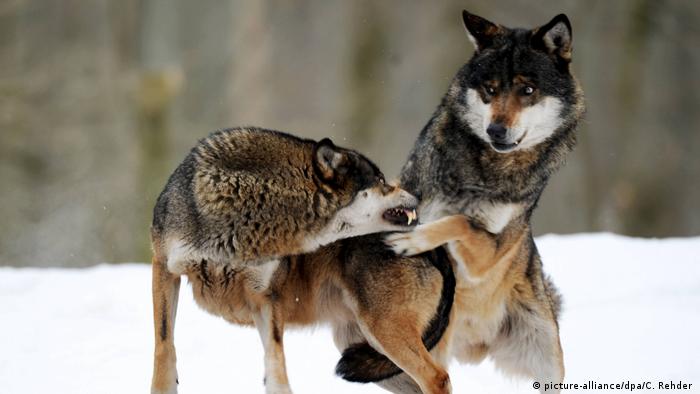 With the wolf population rising and on the prowl in Germany, Environment Minister Svenja Schulze is pushing for a new law to curb the damage they cause to farmers.

Schulze's proposed "Lex Wolf" would make it easier to shoot the protected animals.

"If wolves are repeatedly getting over fences or getting too close to humans, people need to be allowed to shoot them," Schulze told the mass-circulation Bild am Sonntag.

Wolves killed at least 472 farm animals in 2017, according to German officials. However, current laws place the predators under strict environmental protection, which makes shooting them possible only rarely and with official permission, or in a serious emergency. People who ignore these restrictions and harm or kill healthy wolves face hefty fines or even jail time.

'Do not feed the wolves'

In the weekend interview, Schulze said she plans to amend the current regulations. Her new law would allow killing wolves that cause "serious agricultural damage" and give even hobby shepherds permission to fire at the animals.

It would also forbid wolf enthusiasts from feeding the animals.

Feeding "lures wolves close to populated areas," the minister said. "And they don't belong there."

The new law, spearheaded by the left-leaning SPD minister, should be approved "as soon as possible," with the politician still working to get the coalition partner, the CDU, on board.

Germany's Greens slammed Schulze's statements as a far-reaching attack on environmental protection that would pave the way to culling other protected animals.

Wolves had become extinct in Germany in the early 20th century and only emigrated back from Poland around the year 2000, thanks to nature conservation efforts. Their population is climbing and currently includes 73 wolf packs of between 3 and 11 animals, according to statistics provided by federal officials. However, Germany's Federal Office for Environmental Protection said there was not enough data to estimate the predators' total population. Unofficial estimates vary from several hundred to around 1,000 specimens.