Tax money, no limits on donations and somehow campaigns that are much cheaper than in many other countries — DW examines how German parties get their money. 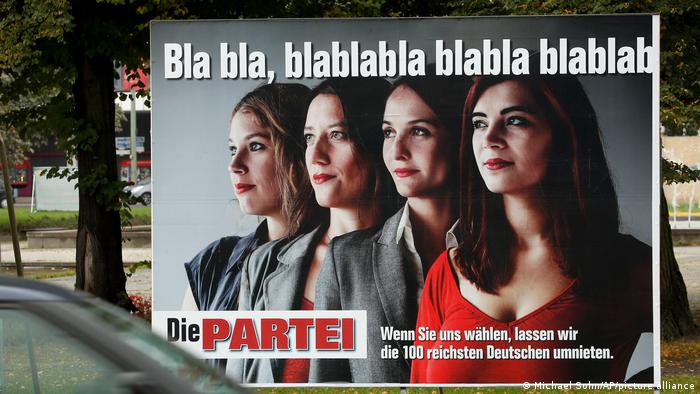 Compared with the United States, the price tag for German elections is pretty cheap.

While American candidates running for Congress or the White House spent a record-breaking $14.4 billion (€12.24 billion) on last year's election, according to the nonpartisan Center for Responsive Politics, political parties in Germany spend a fraction of that.

In 2017, the last time Germany held a parliamentary election, parties spent €92 million ($109.6 million) combined on their election campaigns, according to the Federal Statistical Office. In both countries the cost of campaigns has been rising in recent years as the battle for votes moves increasingly online and higher production values become the norm for party conferences and election events. But Germany is still a long way off from the level of spending in the US.

The secret to Germany's thrifty elections lies in state funding for major parties and the country's strict party financing laws.

Elections in Germany: Where do political parties get their money?

How are political campaigns financed in Germany?

Unlike in the United States and other countries, there is no distinction in Germany between campaign funds and political party funds. Campaigning is considered part of the normal duties of a political party and is therefore included in the party's total budget.

Who gives the parties money?

Taxpayers, party members and corporate and individual donors provide political parties with the vast majority of their nonstate funds.

Political parties and their campaigns are financed through a pot of money that includes federal government support, party membership fees and donations from corporations and individuals. All major political parties in Germany receive funding from the federal government, but the amount they receive depends on how well each party fares in elections on the state, federal and EU levels.

Parties are eligible for public funding if they manage to snag at least 1% of the vote at the state level or 0.5% of the vote in either the EU or national elections.

The government then gives each party €1.06 for the first 4 million votes and 87 cents for every vote after. Each party also receives 45 cents for every euro the party raises through membership fees as well as from private donations up to €3,300.

How much can someone donate to a party?

In Germany, like the speed limit on the Autobahn, there is no limit to how large donations from corporations or from individuals can be. There's also no limit to how much the parties are allowed to spend on election campaigns.

Despite the sky's-the-limit approach to contributions, private donations usually only make up a fraction of each party's budget.

One of the main requirements is that all donations over €50,000 must be reported to the Bundestag. The parliament then posts a list of the donations on its website, including the names and addresses of the companies or people who donated.

The largest donation in  2021 came from a software developer and cryptocurrency investor. He donated €1 million to the Greens.

Why are campaign costs so low?

German political parties spend a lot less on advertising than parties in the United States, where inundating voters with phone calls, emails and attack ads on television for months on end has become the expensive norm.

Like many voters all over the world, Germans can contest the results or the procedure of a general election. DW tells you how they do it and who is involved.