Germany's defense minister has met with female victims from the Yazidi minority group in northern Iraq. It is the German minister's third and final day of her inaugural tour of the Middle East. 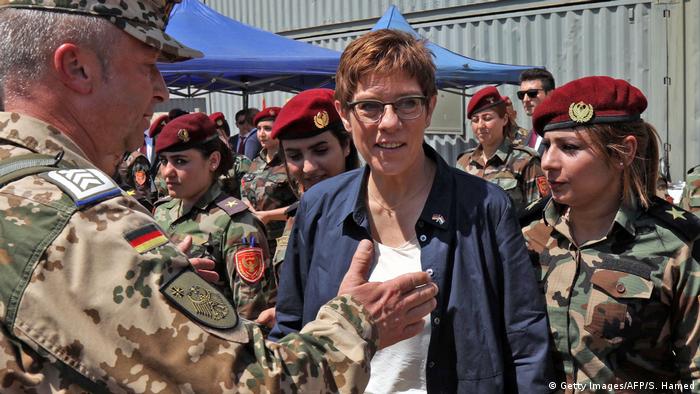 German Defense Minister Annegret Kramp-Karrenbauer concluded her three-day tour of the Middle East on Wednesday, full of admiration for the women and girls from the Yazidi minority group in northern Iraq who were enslaved and abused by "Islamic State" militants.

The recently installed defense minister was wary of history repeating itself as she said: "They need more targeted help so that they are not victims of this terrorism a second time."

The fight against IS has not finished, the German politician admitted.

"This was a very emotional moment for me this morning, and that alone is a good reason to say: We should continue acting here in this region," she said.

During her visit to Erbil, the region's capital and the most populated city in Iraqi Kurdistan, Kramp-Karrenbauer also met with Kurdish Interior Minister Rebar Ahmed.

After her meeting with Ahmed, the German Defense Ministry quoted Ahmed on Twitter as saying, "Our plea to the international community and Germany: strengthen your presence here in the region."

Read more: Syrian Kurds hand over IS children to Germany

Kramp-Karrenbauer expressed her gratitude to the Iraqi Kurdish fighters for their help in fighting the militants.

"We have a joint goal. This goal is to defeat the Islamic State terrorism in the long term," she said.

The defense minister, also known by her initials, AKK, concluded that Germany would not forget the sacrifices made by Iraqi Kurds. "You have lost lives and fought this fight, not only for the security of your own region, but for the security of Europe and Germany as well," she said.

The 56-year-old visited Jordan, in addition to Iraq, as part of her first trip to the region and said the mission was to help her gain a better understanding of the anti-terrorist mission the German troops are involved in on the ground there.

On their long journey to recovery, some of the Yazidi women and girls who survived genocide and sexual slavery at the hands of "Islamic State" have taken up boxing to help heal and rebuild their self-confidence. (28.07.2019)