There were scenes of jubilation in the away end at Signal Iduna Park as Werder Bremen knocked out Bundesliga leaders Borussia Dortmund. Bremen only forced a shootout with an equalizer in the final minute of extra time. 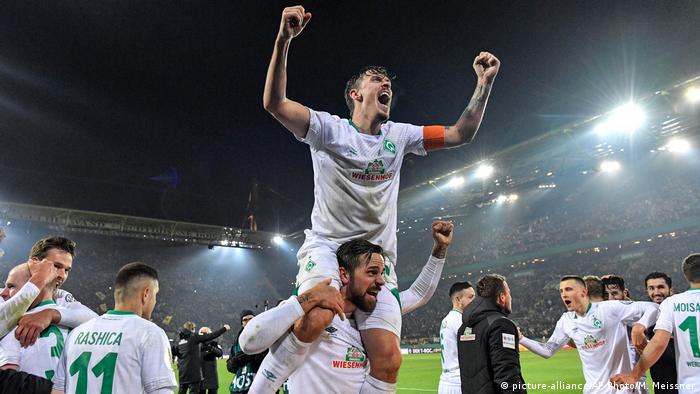 It wasn’t long before Werder Bremen went ahead. Max Kruse crossed the ball into the box in the fifth minute, and Milot Rashica’s slight touch sent the ball underneath debutant Eric Oelschlägel to give Werder Bremen the lead.

Rashica almost scored his second in the 32nd minute as the forward took a shot from inside the box after a Davy Klaassen cross, but it went wide.

Dortmund had 70 percent of the ball in the first half, but it took them until the 45th minute to find the equalizer. The home side got a free kick just outside the box, and Marco Reus curved the ball right into the top right corner. Pavlenka had no chance. 1-1 was the score at half time.

It was Marco Reus that was replaced by Paco Alcacer after the break, with reports suggesting the substitute was due to Reus feeling his groin at half time. Seven minutes into the second half and Bremen almost scored their second, as Max Kruse took a shot from outside the box, but Oelschlägel managed to push the ball out for a corner. 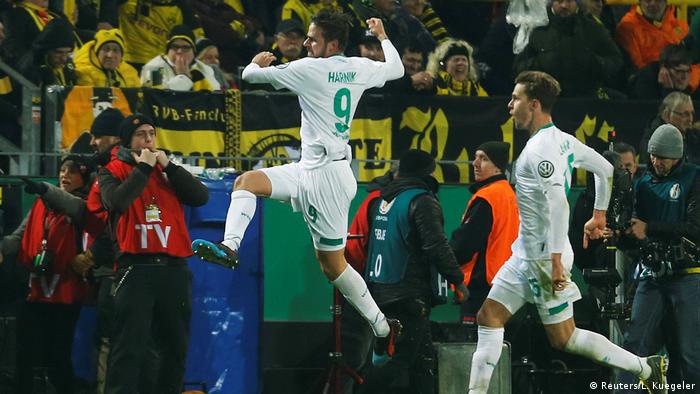 Werder Bremen almost won the game just before full time. Max Kruse took a free kick from outside the box. The ball was deflected and almost went in, but Oelschlägel barely managed to tip it out. Just one minute later, a Thomas Delaney header has hit the post. The game then went to extra time.

It was Dortmund who managed to break the deadlock in  the 105th minute as Christian Pulisic received the ball inside the box from a Paco Alcacer pass. The American finished coolly to put the ball past Pavlenka, and give Dortmund the lead.

It didn’t last long, and it was 40-year-old Claudio Pizarro that scored Werder Bremen’s equalizer from close range in the 108th minute.

Five minutes later, and the home side took the lead once again. Maximilian Philipp dribbled past Max Kruse and crossed the ball to Hakimi, who easily pushed it in from 5 meters. It’s 3-2 Dortmund.

But that wasn’t it. In the 119th minute, striker Martin Harnik headed the equalizer in after a Werder Bremen corner. Four goals scored within the space of four minutes. 3-3 was the final score, and the match went to penalties.

In the penalty shootout, it was Jiri Pavlenka time. The Czech keeper saved Borussia Dortmund’s first two shots, by Alcacer and Philipp, while Bremen’s Pizarro, Eggestein and Klassen remained calm and scored theirs. Julian Weigl managed to keep Dortmund in the game for another shot, but Max Kruse’s perfect penalty sealed the win for the guests, and it’s Werder Bremen who proceed to the quarter finals.

WERDER BREMEN WIN 4-2 ON PENALTIES! Dortmund are out of the German Cup! What a crazy, crazy game.

119' GOAL! Dortmund 3-3 Werder Bremen — Harnik scores and it's 3-3! Absolutely unbelievable extra time here in Dortmund as Bremen level once more, this time Harnik heads in from a corner and we surely are heading for extra time now.

113' GOAL! Dortmund 3-2 Werder Bremen — Absolutely bonkers! Hakimi scores from close range after a strong run and cross from Max Philipp down the right, but there was a strong shout of handball against Bruun Larsen in the build-up that the referee didn't spot.

108' GOAL! Dortmund 2-2 Werder Bremen — Unbelievable! Bremen are level and maybe we're heading for penalties after all... Substitute Möhwald wins the ball in the Dortmund box, his shit is saved by Oelschlägel, and another substitute Claudio Pizarro turns in the rebound! All square again.

HT of ET Dortmund 2-1 Werder Bremen — A quick switch of ends ahead of the final 15 minutes. Can Dortmund hang on and avoid a penalty shootout?

105' GOAL! Dortmund 2-1 Werder Bremen — Dortmund have the lead and it's Pulisic! Witsel's header in midfield finds Pulisic, who races at the Bremen defense, exchanges passes with Alcacer, and then finishes low under Pavlenka.

94' Bruun Larsen is on and has added a bit of pace to Dortmund's attack, with Götze making way. The problem for Dortmund is that they look disjointed and don't really have a focal point to their attack, making it easier for Bremen to defend against.

90'+1 Off the bar! Delaney's header from a Götze corner grazes the top of the bar! Huge chances at each end as we go into the final moments...

89' Amazing save! Dortmund's replacement keeper Oelschlägel makes a stunning save to keep out Kruse, whose free-kick deflected off the wall and towards goal. But Oelschlägel readjusted his feet brilliantly to make the save and keep Dortmund in the Cup!

85' It looks like we're heading for extra time, unless someone can produce some magic in the final few minutes...

82' Bremen are still defending well, but they're not being tested too much.

78' The man Dortmund need to get them a goal is unfortunately sat on the bench, and that's Marco Reus. With Sancho being rested, Dortmund look a little short of ideas.

73' The longer the game goes on the more emboldened Bremen become. One counter-attack is all they need here.

70' Lucien Favre is barking instructions from the very edge of his technical area. Dortmund getting into good positions, but the final ball is letting them down at the moment.

62' Hakimi gets into a great position on the right but over hits his cross to Götze. Reus was waiting for a good ball in too.

58' Dortmund continuing to call the shots, but Bremen are not budging. It's been an impressive defensive performance by the visitors tonight.

54' Kruse has a go from the edge of the box, but his low shot is kept out by Oelschlägel, who dives low to his left.

50' Dortmund have started the second half like a side that want this game wrapped up. No one wants extra time...

46' SECOND HALF. We're back underway in Dortmund.

HT — Dortmund 1-1 Werder Bremen: All square at the break and Dortmund have Reus to thank for a stunning free-kick to draw them level after Bremen had taken the lead inside five minutes.

45'+3 GOAL! Dortmund 1-1 Werder Bremen — Reus scores a firecracker! The Germany star bends a beautiful free-kick over the wall and into the far corner. Amazing strike to draw Dortmund level, right on the stroke of half time.

42' Dortmund keep probing and it seems only a matter of time before they make the breakthrough — but Bremen are defending admirably.

34' Bremen chance! This is the danger for Dortmund: the counter-attack. Klaasen bursts down the left and picks out Rashica who slides his shot just wide. Close to a second for Bremen.

30' Bargfrede lucky not to be shown a yellow for a cynical late chop on Pulisic. Bremen starting to commit a few of those.

26' Dortmund creating chances but Bremen looking dangerous on the break. Dortmund need to be careful they don't get caught on the break.

22' Pulisic has been lively. He skips into space and finds Reus, who drills a low ball across the face of goal — just too far in front of Götze and Guerreiro.

14' Close! Pulisic gallops into space down the right and finds Götze, who flicks the ball just wide of the far post. The German had a bit more time than he realized there.

9' Dortmund have reacted well to going behind, but Bremen are sitting deep and making themselves hard to break down.

5' GOAL! Dortmund 0-1 Bremen — What a start for Bremen! Kruse lashes the free-kick at goal and Milot Rashica sticks out a leg and the ball skims off his toe, wrongfooting Oelschlägel in the Dortmund goal.

4' Bremen have started well and won a free-kick off Diallo on the edge of the Dortmund box.

1' KICK OFF! We're underway in Dortmund.

20:35 Hello everyone and welcome to live coverage of this third round German Cup clash between Borussia Dortmund and Werder Bremen.