Telecommunications giant Deutsche Telekom and several other German firms have stopped advertising on the US media outlet Breitbart. A similar snub by Kellogg's had sparked a furious response from the right-wing site. 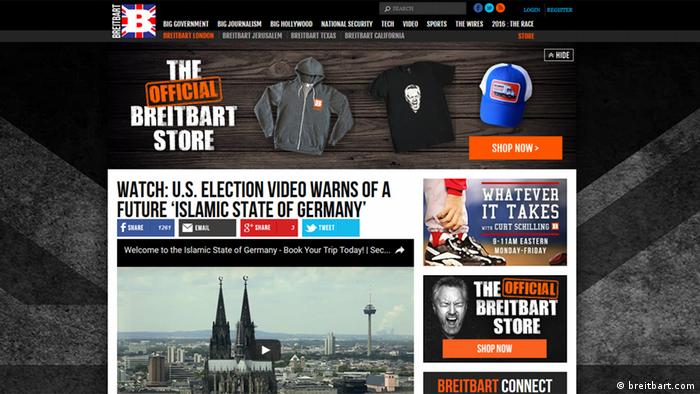 The carmaker BMW, the restaurant chain Vapiano, the supermarket chain Rewe, and Deutsche Telekom have all pulled their ads from the pro-Trump news site due to concerns about its content, the Associated Press reported on Wednesday.

"The positions held by Breitbart.com contrast with Vapiano's values, such as openness and tolerance," said the restaurant chain offering Italian food across Europe and the US.

Deutsche Telekom is also present on the American market through its subsidiary T-mobile, the third-largest wireless carrier in the US. Replying to a DW inquiry, Deutsche Telekom said they "very much regret" that their ads appeared on Breitbart, which is often branded a far-right hate site.

The company "does not tolerate discriminatory actions or statements in any way," a representative for the company said. "We reacted immediately, taken the ads off and put the site on a blacklist," they told DW.

The move coincides with Twitter campaigns that pressure companies to cut off ad revenue to far-right outlets - the Stop Funding Hate in the UK and the Kein Geld Für Rechts (No Money for the Right) in Germany.

Last week, the US cereal company Kellogg's also pulled its ads from Breitbart, saying that its "values" were not aligned with those propagated on the website. Breitbart responded with a slew of anti-Kellogg's articles, decrying the cereal company as "far-left" and calling for a boycott of its products.

The "left-wing causes and projects" backed by Kellogg's included Save the Children Fund, the Ms. Foundation for Women, and the World Wildlife Fund, according to information presented on the site.

The US website is reportedly eyeing off French and German markets.